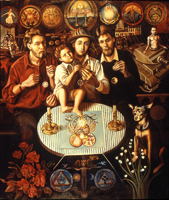 A narrative or story is created in a variety of formats - written, spoken, poetry, prose, images, song, theater or dance that describe a sequence of fictional or non-fictional events. It derives from the Latin verb narrare, which means "to recount" and is related to the adjective gnarus, meaning "knowing" or "skilled". (Ultimately derived from the Proto-Indo-European root gnō-, "to know".[1] The word "story" may be used as a synonym of "narrative", but can also be used to refer to the sequence of events described in a narrative. A narrative can also be told by a character within a larger narrative. An important part of narration is the narrative mode.

Along with exposition, argumentation, and description, narration, broadly defined, is one of four rhetorical modes of discourse. More narrowly defined, it is the fiction-writing mode whereby the narrator communicates directly to the reader.

Stories are an important aspect of culture. Many works of art, and most works of literature, tell stories; indeed, most of the humanities involve stories.

Stories are of ancient origin, existing in ancient Egyptian, Greek, Chinese and Indian cultures. Stories are also a ubiquitous component of human communication, used as parables and examples to illustrate points. Storytelling was probably one of the earliest forms of entertainment. Narrative may also refer to psychological processes in self-identity, memory and meaning-making.

In postmodern theory, semiotics begins with the individual building blocks of meaning called signs and semantics, the way in which signs are combined into codes to transmit messages. This is part of a general communication system using both verbal and non-verbal elements, and creating a discourse with different modalities and forms. In On Realism in Art, Roman Jakobson argues that literature does not exist as a separate entity. He and many other semioticians prefer the view that all texts, whether spoken or written, are the same, except that some authors encode their texts with distinctive literary qualities that distinguish them from other forms of discourse. Nevertheless, there is a clear trend to address literary narrative forms as separable from other forms. This is first seen in Russian Formalism through Victor Shklovsky's analysis of the relationship between composition and style, and in the work of Vladimir Propp, who analysed the plots used in traditional folk-tales and identified distinct functional components. This trend (or these trends) continued in the work of the Prague School and of French scholars such as Claude Lévi-Strauss and Roland Barthes. It leads to a structural analysis of narrative and an increasingly influential body of modern work that raises important epistemological questions:

For general purposes in semiotics and literary theory, a "narrative" is a story or part of a story. It may be spoken, written or imagined, and it will have one or more points of view representing some or all of the participants or observers. In stories told verbally, there is a person telling the story, a narrator whom the audience can see and/or hear, and who adds layers of meaning to the text non-verbally. The narrator also has the opportunity to monitor the audience's response to the story and modify the manner of the telling to clarify content or enhance listener interest. This is distinguishable from the written form in which the author must gauge the readers' likely reactions when they are decoding the text and make a final choice of words in the hope of achieving the desired response.

Whatever the form, the content may concern real-world people and events. This is termed "personal experience narrative". When the content is fictional, different conventions apply. The text projects a narrative voice, but the narrator belongs to an invented or maginary world, not the real one. The narrator may be one of the characters in the story. Roland Barthes describes such characters as "paper beings", and fiction comprises their narratives of personal experience as created by the author. When their thoughts are included, this is termed internal focalisation: when each character's mind focuses on a particular event, the text reflects his or her reactions.

In written forms, the reader hears the narrator's voice both through the choice of content and the style — the author can encode voices for different emotions and situations, and the voices can be either overt or covert —, and through clues that reveal the narrator's beliefs, values, and ideological stances, as well as the author's attitude towards people, events and things. It is customary to distinguish a first-person from a third-person narrative: Gérard Genette uses the terms homodiegetic and heterodiegetic narrative respectively. A homodiegetic narrator describes his or her personal and subjective experiences as a character in the story. Such a narrator cannot know anything more about what goes on in the minds of any of the other characters than is revealed through their actions, whereas a heterodiegetic narrator describes the experiences of the characters who appear in the story and, if the story's events are seen through the eyes of a third-person internal focaliser, this is termed a figural narrative. In some stories, the author may be overtly omniscient, and both employ multiple points of view and comment directly on events as they occur.

Tzvetan Todorov (1969) coined the term "narratology" for the structuralist analysis of any given narrative into its constituent parts to determine their function(s) and relationships. For these purposes, the story is what is narrated as usually a chronological sequence of themes, motives and plot lines; hence, the plot represents the logical and causal structure of a story, explaining why its events occur. The term discourse is used to describe the stylistic choices that determine how the narrative text or performance finally appears to the audience. One of the stylistic decisions may be to present events in non-chronological order, using flashbacks, for example, to reveal motivations at a dramatic moment.

Narration as a fiction-writing mode

As with many words in the English language, narration has more than one meaning. In its broadest context, narration encompasses all written fiction.

As one of the four rhetorical modes of discourse, the purpose of narration is to tell a story or to narrate an event or series of events. Narrative may exist in a variety of forms, including biographies, anecdotes, short stories and novels. In this context, all written fiction may be viewed as narration.

Within philosophy of mind, the social sciences and various clinical fields including medicine, narrative can refer to aspects of human psychology.[3]. A personal narrative process is involved in a person's sense of personal or cultural identity, and in the creation and construction of memories, and is thought by some to be the fundamental nature of the self. [4]. The breakdown of a coherent or positive narrative has been implicated in the development of psychosis and other mental disorders, and its repair said to play an important role in journeys of recovery. [5].