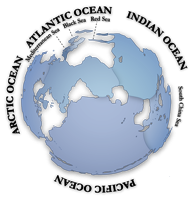 An ocean (from Greek Ωκεανός, Okeanos (Oceanus)) is a major body of saline water, and a principal component of the hydrosphere. Approximately 71% of the Earth's surface (~3.61 X 1014 m2) is covered by ocean, a continuous body of water that is customarily divided into several principal oceans and smaller seas.