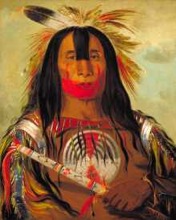 When the red man crossed over into America, he brought along much of the teachings and traditions of his early origin. His immediate ancestors had been in touch with the later activities of the world headquarters of the Planetary Prince. But in a short time after reaching the Americas, the red men began to lose sight of these teachings, and there occurred a great decline in intellectual and spiritual culture. Very soon these people again fell to fighting so fiercely among themselves that it appeared that these tribal wars would result in the speedy extinction of this remnant of the comparatively pure red race.

Because of this great retrogression the red men seemed doomed when, about sixty-five thousand years ago, Onamonalonton appeared as their leader and spiritual deliverer. He brought temporary peace among the American red men and revived their worship of the " Great Spirit. " Onamonalonton lived to be ninety-six years of age and maintained his headquarters among the great redwood trees of California. Many of his later descendants have come down to modern times among the Blackfoot Indians.

As time passed, the teachings of Onamonalonton became hazy traditions. Internecine wars were resumed, and never after the days of this great teacher did another leader succeed in bringing universal peace among them. Increasingly the more intelligent strains perished in these tribal struggles; otherwise a great civilization would have been built upon the North American continent by these able and intelligent red men.