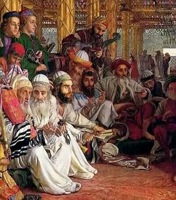 The Pharisees (lat. pharisæ|us, -i; from heb. פרושים perushim/פרוש parush, meaning "set apart") were at various times a political party, a social movement, and a school of thought among Jews during the Second Temple period under the Hasmonean dynasty (140–37 BCE) in the wake of the Maccabean Revolt.

Conflicts between the Pharisees and the Sadducees took place in the context of much broader and longstanding social and religious conflicts among Jews dating back to the Babylonian captivity and exacerbated by the Roman conquest. One conflict was class, between the wealthy and the poor, as the Sadducees included mainly the priestly and aristocratic families. Another conflict was cultural, between those who favored hellenization and those who resisted it. A third was juridico-religious, between those who emphasized the importance of the Temple, and those who emphasized the importance of other Mosaic laws and prophetic values. A fourth, specifically religious, involved different interpretations of the Bible (or Tanakh), and how to apply the Torah to Jewish life, with the Sadducees recognizing only the written letter of the Tanakh or Torah and rejecting life after death, while the Pharisees held to Rabbinic interpretations additional to the written texts. Josephus indicates that the Pharisees received the backing and goodwill of the common people, apparently in contrast to the more elite Sadducees. Pharisees claimed prophetic or Mosaic authority for their interpretation of Jewish laws, while the Sadducees represented the authority of the priestly privileges and prerogatives established since the days of Solomon, when Zadok, their ancestor, officiated as High Priest.

After the destruction of the Second Temple in 70 CE Pharisaic beliefs became the basis for Rabbinic Judaism, which ultimately produced the normative traditional Judaism which is the basis for all contemporary forms of Judaism except for the Karaism.

Outside of Jewish history and writings, the Pharisees have been made notable by references in the New Testament to conflicts between themselves and John the Baptist and with Jesus. There are also several references in the New Testament to Paul of Tarsus being a Pharisee before he became a Christian. Christian traditions have been a cause of widespread awareness of the Pharisees. [1]