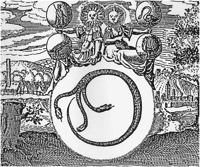 Many of the texts in which the post-classical Latin and Greek forms occur are hard to date with certainty, but the evidence suggests that the form lapis philosophorum was neither the first name for the philosophers' stone to be used in Latin alchemical texts nor, until the 15th or 16th cent., the most common. It does not appear in three major texts to which early dates can be assigned, all of which are translations from Arabic: the Liber de compositione alchemiae (12th or 13th cent.) refers to the philosophers' stone simply as lapis, although it does use the form ignis philosophorum ‘the philosophers' fire’; the Latin version by Philippus Tripolitanus of the pseudo-Aristotelian Secreta secretorum (early 13th cent.) calls it lapidem..qui non est lapis ‘the stone which is not a stone’, adding that it is also known as ovum philosophorum ‘the philosophers' egg’ Compounds 3; both of these Latin phrases are direct translations from the Arabic, and the former goes back ultimately to Hellenistic Greek or Byzantine Greek (4th cent. A.D. or earlier)); the Turba philosophorum (13th cent.) likewise refers to it as lapis and res..quae lapis est et non lapis. The form lapis philosophorum is found by the late 13th or early 14th cent. in some MSS of the pseudo-Geberian summa perfectionis, but appears at first to be less common than lapis noster ‘our stone’ (for which see Dictionary of Medieval Latin from British Sources s.v. lapis 15a); it coexists with periphrases such as lapidem magnum quem omnes philosophi quesierunt ‘the great stone which all philosophers have sought’ (Joannes de Rupescissa De confectione veri lapidis philosophorum). The form lapis philosophicus appears in other early MSS of the summa perfectionis, and the rarer lapis philosophalis in at least one 15th-cent. source, but by the end of the 16th cent. lapis philosophorum was increasingly the preferred form, appearing in a wide variety of occult texts.

an imaginary stone, substance, or chemical preparation believed to have the power of transmuting baser metals into gold and sought by alchemists; broadly : an elusive or imaginary key to success —called also philosophers' stone

The philosophers' stone (Latin: lapis philosophorum) is a legendary alchemical substance, said to be capable of turning base metals, especially lead, into gold (chrysopoeia); it was also sometimes believed to be an elixir of life, useful for rejuvenation and possibly for achieving immortality. For a long time, it was the most sought-after goal in Western alchemy, meditated upon by alchemists like Sir Isaac Newton, Nicolas Flamel, and Frater Albertus. The Stone was the central symbol of the mystical terminology of alchemy, symbolizing perfection, enlightenment, heavenly bliss, theophany and of the Christ. The discovery of the philosopher's stone was known as the Great Work.