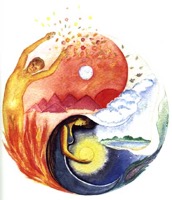 Polarity is a relation between two opposite attributes or tendencies; "he viewed it as a balanced polarity between good and evil" mutual opposition, oppositeness, opposition - the relation between opposed entities. It can also refer to having an indicated pole (as the distinction between positive and negative electric charges); "he got the polarity of the battery reversed"; "charges of opposite sign"

Grammatical polarity is the distinction of affirmative and negative, which indicates the truth or falsehood of a statement respectively. In English, grammatical polarity is generally indicated by the presence or absence of the modifier not, which negates the statement. Many other languages contain similar modifiers: Italian and Interlingua have non, Spanish has no, French has ne ... pas, German has nicht, and Swedish has inte.

For lessons on the topic of Polarity, follow this link.

Polarity is a description of an attribute, typically a binary attribute (one with two values), or a vector (a direction). For example:

Chemical polarity is a feature of chemical bonds, where two different atoms in the same molecule have different electronegativity. As a result, the electrons in the bond are not shared equally by the two atoms. This causes an asymmetrical (polar) electric field. Molecular covalent bonds can be described as polar or nonpolar. Entire molecules can also be described as polar.