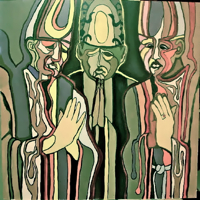 A priest or priestess is a person having the authority or power to administer religious rites; in particular, rites of sacrifice to, and propitiation of, a deity or deities. Their office or position is the priesthood, a term which may also apply to such persons collectively.

Priests and priestesses have been known since the earliest of times and in the simplest societies. They exist in all or some branches of Judaism, Christianity, Shintoism, Hinduism, and many other religions, as well, and are generally regarded as having good contact with the deities of the religion to which they subscribe, often interpreting the meaning of events, performing the rituals of the religion, and to whom other believers often will turn for advice on spiritual matters.

In many religions, being a priest or priestess is a full-time job, ruling out any other career. In other cases it is a part-time role. For example in the early history of Iceland the chieftains were entitled goði, a word meaning "priest". But as seen in the saga of Hrafnkell Freysgoði, being a priest consisted merely of offering periodic sacrifices to the Norse gods and goddesses; it was not a full time job, nor did it involve ordination.

In some religions, being a priest is by human election or human choice. In others the priesthood is inherited in familial lines.

Women officiating in modern Paganism, Neopagan religions such as Wicca, and various Polytheistic Reconstructionism faiths are referred to as priestesses; however, in contemporary Christian churches that ordain women, such as those of the Anglican Communion or the Christian Community, ordained women are called priests.