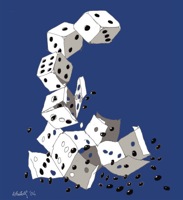 Probability is a way of expressing knowledge or belief that an event will occur or has occurred. In mathematics the concept has been given an exact meaning in probability theory, that is used extensively in such areas of study as mathematics, statistics, finance, gambling, science, and philosophy to draw conclusions about the likelihood of potential events and the underlying mechanics of complex systems.

For lessons on the topic of Probability, follow this link.

The word probability does not have a consistent direct definition. In fact, there are sixteen broad categories of probability interpretations, whose adherents possess different (and sometimes conflicting) views about the fundamental nature of probability:

The word probability derives from probity, a measure of the authority of a witness in a legal case in Europe, and often correlated with the witness's nobility. In a sense, this differs much from the modern meaning of probability, which, in contrast, is used as a measure of the weight of empirical evidence, and is arrived at from inductive reasoning and statistical inference.[2][3]

The scientific study of probability is a modern development. Gambling shows that there has been an interest in quantifying the ideas of probability for millennia, but exact mathematical descriptions of use in those problems only arose much later.

According to Richard Jeffrey, "Before the middle of the seventeenth century, the term 'probable' (Latin probabilis) meant approvable, and was applied in that sense, univocally, to opinion and to action. A probable action or opinion was one such as sensible people would undertake or hold, in the circumstances."[4] However, in legal contexts especially, 'probable' could also apply to propositions for which there was good evidence.[5]

Aside from some elementary considerations made by Girolamo Cardano in the 16th century, the doctrine of probabilities dates to the correspondence of Pierre de Fermat and Blaise Pascal (1654). Christiaan Huygens (1657) gave the earliest known scientific treatment of the subject. Jakob Bernoulli's Ars Conjectandi (posthumous, 1713) and Abraham de Moivre's Doctrine of Chances (1718) treated the subject as a branch of mathematics. See Ian Hacking's The Emergence of Probability and James Franklin's The Science of Conjecture for histories of the early development of the very concept of mathematical probability.

The theory of errors may be traced back to Roger Cotes's Opera Miscellanea (posthumous, 1722), but a memoir prepared by Thomas Simpson in 1755 (printed 1756) first applied the theory to the discussion of errors of observation. The reprint (1757) of this memoir lays down the axioms that positive and negative errors are equally probable, and that there are certain assignable limits within which all errors may be supposed to fall; continuous errors are discussed and a probability curve is given.

Pierre-Simon Laplace (1774) made the first attempt to deduce a rule for the combination of observations from the principles of the theory of probabilities. He represented the law of probability of errors by a curve y = φ(x), x being any error and y its probability, and laid down three properties of this curve:

He also gave (1781) a formula for the law of facility of error (a term due to Lagrange, 1774), but one which led to unmanageable equations. Daniel Bernoulli (1778) introduced the principle of the maximum product of the probabilities of a system of concurrent errors.

The method of least squares is due to Adrien-Marie Legendre (1805), who introduced it in his Nouvelles méthodes pour la détermination des orbites des comètes (New Methods for Determining the Orbits of Comets). In ignorance of Legendre's contribution, an Irish-American writer, Robert Adrain, editor of "The Analyst" (1808), first deduced the law of facility of error,

On the geometric side (see integral geometry) contributors to The Educational Times were influential (Miller, Crofton, McColl, Wolstenholme, Watson, and Artemas Martin).[1]