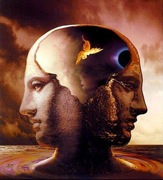 Rationality as a term is related to the idea of reason, a word which following Webster's may be derived as much from older terms referring to thinking itself as from giving an account or an explanation. This lends the term a dual aspect. One aspect associates it with comprehension, intelligence, or inference, particularly when an inference is drawn in ordered ways (thus a syllogism is a rational argument in this sense). The other part associates rationality with explanation, understanding or justification, particularly if it provides a ground or a motive. 'Irrational', therefore, is defined as that which is not endowed with reason or understanding.

For lessons on the topic of Rationality, follow this link.

A logical argument is sometimes described as "rational" if it is logically valid. However, rationality is a much broader term than logic, as it includes "uncertain but sensible" arguments based on probability, expectation, personal experience and the like, whereas logic deals principally with provable facts and demonstrably valid relations between them. For example, ad hominem arguments are logically unsound, but in many cases they may be rational. A simple philosophical definition of rationality refers to one's use of a "practical syllogism". For example,

Therefore, I closed the window

We should note that standard form practical syllogisms follow a very specific format and are always valid if constructed correctly though they are not necessarily sound. There are several notable implications of such a definition. First, rationality is objective - it exists only when a valid practical syllogism is used. Second, a choice is either rational or it is not - there is no gradation since there is no gradation between valid and invalid arguments. Third, rationality only applies to actions - i.e., shutting the window is a rational thing to do if you are cold (assuming it is cold outside). Evidence bears on belief but not on rationality. All that is required for an action to be rational is that you believe that X and that that if X then Y so you do Y. Arguments about belief are couched in the terms valid and sound - logically you must believe something if the argument supporting it is sound. In some cases, such as religious belief, the argument may be valid but its soundness cannot be known for the truth of its premises cannot be known.

Rationality in the humanities and social sciences

In philosophy, rationality and reason are the key methods used to analyse the data gathered through systematically gathered observations. In economics, sociology, and political science, a decision or situation is often called rational if it is in some sense optimal, and individuals or organizations are often called rational if they tend to act somehow optimally in pursuit of their goals. Thus one speaks, for example, of a rational allocation of resources, or of a rational corporate strategy. In this concept of "rationality", the individual's goals or motives are taken for granted and not made subject to criticism, ethical or otherwise. Thus rationality simply refers to the success of goal attainment, whatever those goals may be. Sometimes, in this context, rationality is equated with behavior that is self-interested to the point of being selfish. Sometimes rationality implies having complete knowledge about all the details of a given situation. It might be said that because the goals are not important in definition of rationality, it really only demands logical consistency in choice making. See rational choice theory.

Debates arise in these three fields about whether or not people or organizations are "really" rational, as well as whether it make sense to model them as such in formal models. Some have argued that a kind of bounded rationality makes more sense for such models. Others think that any kind of rationality along the lines of rational choice theory is a useless concept for understanding human behavior; the term homo economicus (economic man: the imaginary logically consistent but amoral being assumed in economic models) was coined largely in honor of this view.

Rationality is a central principle in artificial intelligence, where a rational agent is specifically defined as an agent which always chooses the action which maximises its expected performance, given all of the knowledge it currently possesses.

The German sociologist Max Weber proposed an interpretation of social action that distinguished between four different types of rationality. The first, which he called Zweckrational or purposive/instrumental rationality, is related to the expectations about the behavior of other human beings or objects in the environment. These expectations serve as means for a particular actor to attain ends, ends which Weber noted were "rationally pursued and calculated." The second type, Weber called Wertrational or value/belief-oriented. Here the action is undertaken for what one might call reasons intrinsic to the actor: some ethical, aesthetic, religious or other motive, independent of whether it will lead to success. The third type was affectual, determined by an actor's specific affect, feeling, or emotion - to which Weber himself said that this was a kind of rationality that was on the borderline of what he considered "meaningfully oriented." The fourth was traditional, determined by ingrained habituation. Weber emphasized that it was very unusual to find only one of these orientations: combinations were the norm. His usage also makes clear that he considered the first two as more significant than the others, and it is arguable that the third and fourth are subtypes of the first two. These kinds of rationality were ideal types.

The advantage in this interpretation is that it avoids a value-laden assessment, say, that certain kinds of beliefs are irrational. Instead, Weber suggests that a ground or motive can be given – for religious or affect reasons, for example — that may meet the criterion of explanation or justification even if it is not an explanation that fits the Zweckrational orientation of means and ends. The opposite is therefore also true: some means-ends explanations will not satisfy those whose grounds for action are 'Wertrational'.

Based on the premise that 'feelings of worthlessness' are a maladaptive byproduct of the evolution of rationality, Phil Roberts, Jr. has proposed a theory in which the rationality of an end is presumed to correlate with the comprehensiveness of its underlying considerations, and in which no concrete objective is presumed to be rational in any but a relative sense of the term. In addition to its ability to explain what morality is (a shared subconscious theory of rationality), Roberts has also demonstrated how his theory can be employed to address a number of rationality paradoxes, including the paradox of rational irrationality, cognitive versus practical rationality conflict, the "rationality debate" (Cohen vs. Kahneman and Tversky) and the paradox of the Prisoner's Dilemma.[1]

Use of the term rational

In a number of kinds of speech, "rational" may also denote a hodge-podge of generally positive attributes, including: