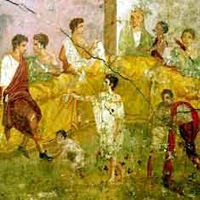 b : the activity or inhibition of previous activity of an organism or any of its parts resulting from stimulation
c : the output of a transducer or detecting device resulting from a given input

For lessons on the topic of (Reaction)/Response, follow this link.

An antiphon (Greek ἀντίφωνον, ἀντί "opposite" + φωνή "voice") in Christian music and ritual, is a "responsory" by a choir or congregation, usually in Gregorian chant, to a psalm or other text in a religious service or musical work.

This gives rise to the general term antiphony, which may be used for any call and response style of singing such as the kirtan and the sea shanty. Particularly, any piece of music performed by two semi-independent choirs in interaction, often singing alternate musical phrases, is known as 'antiphonal'. Antiphonal psalmody is the singing or musical playing of psalms by alternating groups of performers.