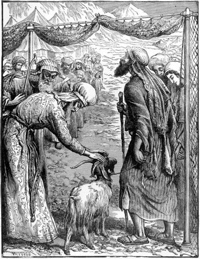 The verb "to scapegoat" (noun form "scapegoating") is a modern form of the older transitive verb-noun construction "to make (someone) a scapegoat". Scapegoat derives from the common English translation of the Hebrew term azazel (Hebrew: עזאזל) which occurs in Leviticus 16:8 after the prefix la- (Hebrew לַ "for"). The lexicographer Gesenius and Brown–Driver–Briggs Hebrew Lexicon give la-azazel (Hebrew: עזאזל) as a reduplicative intensive of the stem azel "remove", hence la-azazel, "for entire removal". This reading is supported by the Greek Old Testament translation as "the sender away (of sins)".

Alternatively, broadly contemporary with the Septuagint, the pseudepigrapical Book of Enoch may preserve Azazel as the name of a fallen angel. English Christian Bible versions traditionally follow the translation of the Septuagint and Latin Vulgate which interpret azazel as "the goat that departs" (Greek tragos apopompaios, "goat sent out", Latin caper emissarius, "emissary goat"). William Tyndale rendered the Latin as "(e)scape goat" in his 1530 Bible. This translation was followed by following versions up to the King James Version of the Bible in 1611:

"And Aaron shall cast lots upon the two goats; one lot for the Lord, and the other lot for the scapegoat."

Several modern versions however either follow the reading as a demon, Azazel, or footnote "for Azazel." as an alternative reading. Jewish sources in the Talmud (Yoma 6:4,67b) give the etymology of azazel as a compound of "az", strong or rough, and "el", mighty, that the goat was sent from the most rugged or strongest of mountains. From the Targums onwards the term azazel was also seen by some rabbinical commentators as the name of a Hebrew demon, angelic force, or pagan deity. The two readings are still disputed today.

b : one that is the object of irrational hostility

In modern usage a scapegoat is an individual, group, or country singled out for unmerited negative treatment or blame. A whipping boy, "fall guy" or "patsy" is a form of scapegoat.

In ancient Greece a cripple or beggar or criminal (the pharmakos) was cast out of the community, either in response to a natural disaster (such as a plague, famine or an invasion) or in response to a calendrical crisis (such as the end of the year). In the Bible, the goat for Azazel was a goat that was designated (Hebrew לַעֲזָאזֵֽל ) la-aza'zeyl to be outcast in the desert as part of the ceremonies of the Day of Atonement, that began during the Exodus with the original Tabernacle and continued through the times of the temples in Jerusalem.

In psychology and sociology, the practice of selecting someone as a scapegoat has led to the concept of scapegoating.