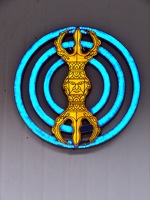 The word sect comes from the Latin noun secta (a feminine form of a variant past participle of the verb sequi, to follow), meaning "(beaten) path", and figuratively a (prescribed) way, mode, or manner, and hence metonymously, a discipline or school of thought as defined by a set of methods and doctrines. The present gamut of meanings of sect has been influenced by confusion with the homonymous (but etymologically unrelated) Latin word secta (the feminine form of the past participle of the verb secare, to cut), as sects were scissions cut away from the mainstream religion. Note that speakers of some other languages use the same word for both the meaning sect and the meaning cult, for example in Italian: setta.

For lessons on the related topic of Cults, follow this link.

b : a religious denomination

A sect is a group with distinctive religious, political or philosophical beliefs. Although in past it was mostly used to refer to religious groups, it has since expanded and in modern culture can refer to any organization that breaks away from a larger one to follow a different set of rules and principles. The term is occasionally used in a malicious way to suggest the broken-off group follows a more negative path than the original. The historical usage of the term sect in Christendom has had pejorative connotations, referring to a group or movement with heretical beliefs or practices that deviate from those of groups considered orthodox.

The English sociologist Roy Wallis argues that a sect is characterized by “epistemological authoritarianism”: sects possess some authoritative locus for the legitimate attribution of heresy. According to Wallis, “sects lay a claim to possess unique and privileged access to the truth or salvation and “their committed adherents typically regard all those outside the confines of the collectivity as 'in error'”. He contrasts this with a cult that he described as characterized by “epistemological individualism” by which he means that “the cult has no clear locus of final authority beyond the individual member.[1]