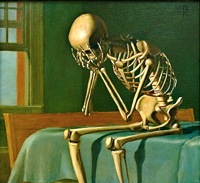 Shame is, variously, an affect, emotion, cognition, state, or condition. The roots of the word shame are thought to derive from an older word meaning to cover; as such, covering oneself, literally or figuratively, is a natural expression of shame.[1]

For lessons on the topic of Shame, follow this link.

Nineteenth century scientist Charles Darwin, in his book The Expression of the Emotions in Man and Animals, described shame affect as consisting of blushing, confusion of mind, downward cast eyes, slack posture, and lowered head, and he noted observations of shame affect in human populations worldwide.[2] He also noted the sense of warmth or heat (associated with the vasodilation of the face and skin) occurring in intense shame.

A "sense of shame" is the consciousness or awareness of shame as a state or condition. Such shame cognition may occur as a result of the experience of shame affect or, more generally, in any situation of embarrassment, dishonor, disgrace, inadequacy, humiliation, or chagrin.[3]

A condition or state of shame may also be assigned externally, by others, regardless of the one's own experience or awareness. "To shame" generally means to actively assign or communicate a state of shame to another. Behaviors designed to "uncover" or "expose" others are sometimes used for this purpose, as are utterances like "Shame!" or "Shame on you!"

Finally, to "have shame" means to maintain a sense of restraint against offending others while to "have no shame" is to behave without such restraint.

Shame vs. guilt and embarrassment

The location of the dividing line between the concepts of shame, guilt, and embarrassment is not fully standardized.[4] According to cultural anthropologist Ruth Benedict, shame is a violation of cultural or social values while guilt feelings arise from violations of one's internal values. Thus, it is possible to feel ashamed of thought or behavior that no one knows about and to feel guilty about actions that gain the approval of others.

Psychoanalyst Helen B. Lewis argued that "The experience of shame is directly about the self, which is the focus of evaluation. In guilt, the self is not the central object of negative evaluation, but rather the thing done is the focus."[5] Similarly, Fossum and Mason say in their book Facing Shame that "While guilt is a painful feeling of regret and responsibility for one's actions, shame is a painful feeling about oneself as a person."[6] Following this line of reasoning, Psychiatrist Judith Lewis Herman concludes that "Shame is an acutely self-conscious state in which the self is 'split,' imagining the self in the eyes of the other; by contrast, in guilt the self is unified."[7]

Clinical psychologist Gershen Kaufman's view of shame is derived from that of Affect Theory, namely that shame is one of a set of instinctual, subcortically-controlled, short-duration physiological reactions to stimulation.[8][9] Kaufman considered guilt to be a learned behavior consisting essentially of self-directed blame or contempt, with shame occurring consequent to such behaviors making up a part of the overall experience of guilt. Here, by self-blame and self-contempt Kaufman means the application, towards (a part of) one's self, of exactly the same dynamic that blaming of, and contempt for, others represents when it is applied interpersonally. Kaufman saw that mechanisms such as blame or contempt may be used as a defending strategy against the experience of shame and that someone who has a pattern of applying them to himself may well attempt to defend against a shame experience by applying self-blame or self-contempt. This, however, can lead to an internalized, self-reinforcing sequence of shame events for which Kaufman coined the term "shame spiral.[8]

One view of difference between shame and embarrassment is that shame does not necessarily involve public humiliation while embarrassment does, that is, one can feel shame for an act known only to oneself but in order to be embarrassed one's actions must be revealed to others. In the field of ethics (moral psychology, in particular), however, there is debate as to whether or not shame is a heteronomous emotion, i.e. whether or not shame does involve recognition on the part of the ashamed that he or she has been judged negatively by others. Immanuel Kant and his followers held that shame is heteronomous; Bernard Williams and others have argued that shame can be autonomous.[10][11] Shame may carry the connotation of a response to something that is morally wrong whereas embarrassment is the response to something that is morally neutral but socially unacceptable. Another view of shame and embarrassment, though, is that the two emotions lie on a continuum and only differ in intensity.

Genuine shame is associated with genuine dishonor, disgrace, or condemnation. False shame is associated with false condemnation as in the double-bind form of false shaming; "he brought what we did to him upon himself". Author and TV personality John Bradshaw calls shame the "emotion that lets us know we are finite".[12] "Toxic" shame describes false, pathological shame, and Bradshaw states that toxic shame is induced, inside children, by all forms of child abuse. Incest and other forms of child sexual abuse can cause particularly severe toxic shame. Toxic shame often induces what is known as complex trauma in children who cannot cope with toxic shaming as it occurs and who dissociate the shame until it is possible to cope with.

Shame is considered one aspect of socialization in all societies. Shame is enshrouded in legal precedent as a pillar of punishment and ostensible correction. Shame has been linked to narcissism in the psychoanalytic literature. It is one of the most intense emotions. The individual experiencing shame may feel totally despicable, worthless and feel that there is no redemption. According to the anthropologist Ruth Benedict, cultures may be classified by their emphasis of using either shame or guilt to regulate the social activities of their members. Shared opinions and expected behaviours that cause the feeling of shame (as well as an associated reproval) if violated by an individual are in any case proven to be very efficient in guiding behaviour in a group or society.

Shame is a common form of control used by those people who commit relational aggression. It is also used in the workplace as a form of overt social control or aggression. Shamery is also a central feature of punishment, shunning, or ostracism. In addition, shame is often seen in victims of child neglect, child abuse and a host of other crimes against children.

A "shame campaign" is a tactic in which particular individuals are singled out because of their behavior or suspected crimes, often by marking them publicly, such as Hester Prynne in Nathaniel Hawthorne's The Scarlet Letter. In the Philippines, Alfredo Lim popularized such tactics during his term as mayor of Manila. On July 1, 1997, he began a controversial "spray paint shame campaign” in an effort to stop drug use. He and his team sprayed bright red paint on two hundred squatter houses whose residents had been charged, but not yet convicted, of selling prohibited substances. Officials of other municipalities followed suit. Former Senator Rene A. Saguisag condemned Lim’s policy.[13]