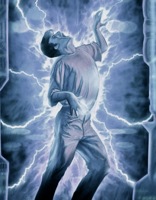 Middle French choc, from choquer to strike against, from Old French choquier, probably of Germanic origin; akin to Middle Dutch schocken to jolt

b : an effect of such violence

b : something that causes such disturbance <the loss came as a shock>
c : a state of being so disturbed <were in shock after they heard the news>

Acute stress reaction (also called acute stress disorder, psychological shock, mental shock, or simply, shock) is a psychological condition arising in response to a terrifying or traumatic event. It should not be confused with the unrelated circulatory condition of shock.

"Acute stress response" was first described by Walter Cannon in the 1920s as a theory that animals react to threats with a general discharge of the sympathetic nervous system. The response was later recognized as the first stage of a general adaptation syndrome that regulates stress responses among vertebrates and other organisms.

The onset of a stress response is associated with specific physiological actions in the sympathetic nervous system, both directly and indirectly through the release of epinephrine and to a lesser extent norepinephrine from the medulla of the adrenal glands. The release is triggered by acetylcholine released from pre-ganglionic sympathetic nerves. These catecholamine hormones facilitate immediate physical reactions by triggering increases in heart rate and breathing, constricting blood vessels in many parts of the body—but not in muscles (vasodilation), brain, lungs, and heart—and tightening muscles. An abundance of catecholamines at neuroreceptor sites facilitates reliance on spontaneous or intuitive behaviors often related to combat or escape.

Normally, when a person is in a serene, unstimulated state, the "firing" of neurons in the locus ceruleus is minimal. A novel stimulus, once perceived, is relayed from the sensory cortex of the brain through the thalamus to the brain stem. That route of signaling increases the rate of noradrenergic activity in the locus ceruleus, and the person becomes alert and attentive to the environment.

If a stimulus is perceived as a threat, a more intense and prolonged discharge of the locus ceruleus activates the sympathetic division of the autonomic nervous system (Thase & Howland, 1995). The activation of the sympathetic nervous system leads to the release of norepinephrine from nerve endings acting on the heart, blood vessels, respiratory centers, and other sites. The ensuing physiological changes constitute a major part of the acute stress response. The other major player in the acute stress response is the hypothalamic-pituitary-adrenal axis.[1]