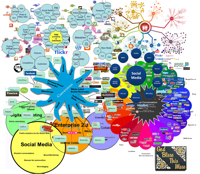 Social refers to human society or its organization. Although the term is a crucial category in social science and often used in public discourse, its meaning is at times vague, suggesting that it is a fuzzy concept. An added difficulty is that social attributes or relationships may not be directly observable and visible, and must be inferred by abstract thought.

Thus the sociologist C. Wright Mills used the expression "the sociological imagination", which referred to the need to think imaginatively beyond what an individual can empirically observe in order to grasp the social domain in all its dimensions — connecting, for example, "private troubles" and "public issues".

A similar point is made in the context of architecture by Ole Bouman and Roemer van Toorn in The Invisible in Architecture. General problems concerning the nature of social reality and what (or how) we can know about it are the object of social theory.

In the absence of agreement about its meaning, the term "social" is used in many different senses, referring among other things to:

In one broad meaning, "social" refers only to society as "a system of common life", but in another sense it contrasts specifically with "individual" and individualist theories of society. This is reflected for instance in the different perspectives of liberalism and socialism on society and public affairs.

The adjective "social" implies that the verb or noun to which it is applied is somehow more communicative, cooperative, and moderated by contact with human beings, than if it were omitted. That is, it implies that larger society has played some role in defining the idea or the principle. For instance terms like social realism, social justice, social constructivism, social psychology and social capital imply that there is some social process involved or considered, a process that is not there in regular, "non-social", realism, justice, constructivism, psychology, or capital.

The adjective "social" is also used often in political discourse, although its meaning in such a context depends heavily on who is using it. In left-wing circles it is often used to imply a positive characteristic, while in right-wing circles it is generally used to imply a negative characteristic. It should also be noted that, overall, this adjective is used much more often by those on the political left than by those on the political right.

For these reasons, those seeking to avoid association with the left-right political debates often seek to label their work with phrases that do not include the word "social". An example is quasi-empiricism in mathematics which is sometimes labelled social constructivism by those who see it as an unwarranted intrusion of social considerations in mathematical practice, which is supposed to be "objective" and "above" social concerns.

In the view of Karl Marx, human beings are intrinsically, necessarily and by definition social beings who - beyond being "gregarious creatures" - cannot survive and meet their needs other than through social co-operation and association. Their social characteristics are therefore to a large extent an objectively given fact, stamped on them from birth and affirmed by socialization processes; and, according to Marx, in producing and reproducing their material life, people must necessarily enter into relations of production which are "independent of their will".

By contrast, the sociologist Max Weber for example defines human action as "social" if, by virtue of the subjective meanings attached to the action by individuals, it "takes account of the behavior of others, and is thereby oriented in its course". In this case, the "social" domain really exists only in the intersubjective relations between individuals, but by implication the life of these individuals also exists in part outside the social domain. "Social" is thus implicitly also contrasted with "private".

In the positivist sociology of Emile Durkheim, a social fact is an abstraction external to the individual which constrains that individual's actions. In his 1895 work Rules of Sociological Method, Durkheim writes: "A social fact is every way of acting, fixed or not, capable of exercising on the individual an influence, or an external constraint; or again, every way of acting which is general throughout a given society, while at the same time existing in its own right independent of its individual manifestations." In Durkheim's view, sociology is 'the science of social facts'.

The term "socialism", used from the 1830s onwards in France and England, was directly related to what was called the social question, in essence the problem that the emergence of competitive market societies did not create "liberty, equality and fraternity" for all citizens, requiring the intervention of politics and social reform to tackle social problems, injustices and grievances (a topic on which Jean-Jacques Rousseau discourses at length in his classic work The Social Contract). Originally the term "socialist" was often used interchangeably with "co-operative", "mutualist", "associationist" and "collectivist".

The term social democracy originally referred to the political project of extending democratic forms of association to the whole of society, substituting popular sovereignty, the universal franchise and social ownership for the rule of a propertied class which had exclusive voting rights.

In contemporary society, "social" often refers to the redistributive policies of the government which aim to apply resources in the public interest, for example, social security. Policy concerns then include the problems of social exclusion and social cohesion. Here, "social" contrasts with "private" and to the distinction between the public and the private (or privatised) spheres, where ownership relations define access to resources and attention.

The social domain is often also contrasted with that of physical nature, but in sociobiology analogies are drawn between humans and other living species in order to explain social behavior in terms of biological factors. The term "social" is also added in various other academic sub-disciplines such as social geography, social psychology, social anthropology, social philosophy, social ontology, social statistics and social choice theory in mathematics.

There is a peculiar use of "social" in some parts of the world. In the Canadian province of Manitoba, a "social" is a fund raising party (for a wedding, non-profit organisation, charity, or some other worthy cause). It is also known as a Manitoba Social. Typically, they will include music (current popular music for the youth and "oldies" music for older adults), dancing, food, raffles (and other fund raising games). When held in support of a wedding, often they are used as a way to shake down some details of the wedding (e.g., letting the bride try a hair style, practicing dancing, etc.).

Another common meaning of a "social" in English-speaking countries such as Britain, New Zealand and Australia is that of a leisure-time gathering with food and drink, organised by an institution, association, or company. A distinguishing feature is that it is deliberately organised at a venue at a predetermined time. Thus one might say, "are you going to the social?", meaning a social event by some organisation.