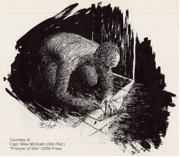 Solitary confinement, colloquially referred to in American English as "the hole", lockdown, M2030D, "the SHU" (pronounced 'shoe') or "the pound" (or in British English "the block"), is a punishment or special form of imprisonment in which a prisoner is denied contact with any other persons, excluding members of prison staff. Usually cited as an additional measure of protection (of society) from the criminal, it has also been called a form of torture. In some cases it is also used as a form of protective custody.

Those who accept the practice consider it necessary for prisoners who are considered dangerous to other people ('the most predatory' prisoners), those who might be capable of leading crime groups even from within, or those who are kept 'incommunicado' for purported reasons of national security. Finally, it may be used for prisoners who are at high risk of being attacked by other inmates, such as pedophiles or witnesses who are in prison themselves. This latter form of solitary confinement is sometimes referred to as protective custody.