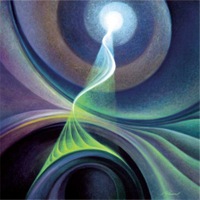 b : a moving spirit : leader

b : the quality that arouses emotion and sentiment
c : spiritual or moral force : fervor

For lessons on the topic of Soul, follow this link.

The Modern English word soul derived from Old English sáwol, sáwel, first attested to in the 8th-century poem Beowulf v. 2820 and in the Vespasian Psalter 77.50, and is cognate with other Germanic and Baltic terms for the same idea, including Gothic saiwala, Old High German sêula, sêla, Old Saxon sêola, Old Low Franconian sêla, sîla, Old Norse sála as well as Lithuanian siela. Further etymology of the Germanic word is uncertain. A more recent suggestion connects it with a root for "binding", Germanic sailian (OE sēlian, OHG seilen), related to the notion of being "bound" in death, and the practice of ritually binding or restraining the corpse of the deceased in the grave to prevent his or her return as a ghost.

The word is probably an adaptation by early missionaries—particularly Ulfilas, apostle to the Goths during the 3rd century—of a native Germanic concept, which was a translation of Greek ψυχή psychē "life, spirit, consciousness".

The Greek word is derived from a verb "to cool, to blow" and hence refers to the vital breath, the animating principle in humans and other animals, as opposed to σῶμα (soma) meaning "body". It could refer to a ghost or spirit of the dead in Homer, and to a more philosophical notion of an immortal and immaterial essence left over at death since Pindar. Latin anima figured as a translation of ψυχή since Terence. Psychē occurs juxtaposed to σῶμα e.g. in Matthew 10:28:

Authorized King James Version (KJV) "And fear not them which kill the body, but are not able to kill the soul: but rather fear Him which is able to destroy both soul and body in hell."

The soul, in many religious, philosophical and mythological traditions, is the incorporeal and, in many conceptions, immortal essence of a living thing. According to the Abrahamic religions in most of their forms, souls—or at least immortal souls—belong only to human beings. For example, the Catholic theologian Thomas Aquinas attributed "soul" (anima) to all organisms but taught that only human souls are immortal. Other religions (most notably Jainism and Hinduism) teach that all biological organisms have souls, and others teach that even non-biological entities (such as rivers and mountains) possess souls. This latter belief is called animism.

Greek philosophers such as Socrates, Plato and Aristotle understood the psyche (ψυχή) to be crowned with the logical faculty, the exercise of which was the most divine of human actions. At his defense trial, Socrates even summarized his teachings as nothing other than an exhortation for his fellow Athenians to firstly excel in matters of the psyche since all bodily goods are dependent on such excellence (The Apology 30a–b).

The human personality is identified with mind and spirit held together in functional relationship by life in a material body. This functioning relationship of such mind and spirit does not result in some combination of the qualities or attributes of mind and spirit but rather in an entirely new, original, and unique universe value of potentially eternal endurance, the soul. (111:2)