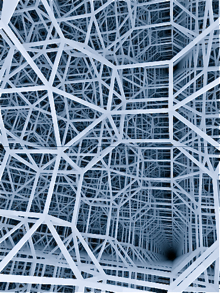 Structure is that form shared where mulitple components, facets, or parts function as a single entity.

Structure is how a story, narrative, anecdote or other writings of information and knowledge are made. More generally, a structure is the composition of knowledge as elements and their combinations. The content is the information and experiences created by individuals, institutions and technology to benefit audiences in contexts that they value. This include the raw content is content in format that is detectable by an observer and the sections, parts or the whole of a document regardless of the medium. Structure forms the subject of the plot, in narrative works. The book by Thomas Kuhn on the history of science, entitled The Structure of Scientific Revolutions, is an analysis of the history of science. Its publication was a landmark event in the sociology of knowledge, and popularized the terms paradigm and paradigm shift. Among the people that are notable in the concept of structure, Alfred Korzybski is probably best-remembered for developing the theory of general semantics.

As regards for information, text encoding consists of a code that pairs a sequence of characters from a given set with something else, such as a sequence of natural numbers, octets or electrical pulses, in order to facilitate the storage of text in computers and the transmission of text through telecommunication networks. Data structure is a way of storing information and data in a computer so that it can be used efficiently The parser (more formally syntactic analysis) is the processor of the sequence of information tokens to determine its grammatical structure with respect to a given formal grammar. A parser is the component of a compiler that carries out this task.

An abstract structure is a formal object that is defined by a set of laws, properties, and relationships in a way that is logically if not always historically independent of the structure of contingent experiences, for example, those involving physical objects. Abstract structures are studied not only in logic and mathematics but in the fields that apply them, as computer science, and in the studies that reflect on them, as philosophy and especially the philosophy of mathematics. Indeed, modern mathematics has been defined in a very general sense as the study of abstract structures. Mathematical structure on a set, additional mathematical objects that in some manner attach to the set, making it easier to visualize or work with, or endowing the collection with meaning or significance

A tree structure is a way of representing the hierarchical nature of a structure in a graphical form. It is named a "tree structure" because the graph looks a bit like a tree, even though the tree is generally shown upside down compared with a real tree; that is to say with the root at the top and the leaves at the bottom. In mathematical logic, a structure is an object that gives semantic meanings to the symbols in a logical language. The most common setting is with first-order languages, but structures for typed and higher-order languages are also important. In universal algebra, a branch of pure mathematics, an algebraic structure consists of one or more sets closed under one or more operations, satisfying some axioms. Abstract algebra is primarily the study of algebraic structures and their properties.

Chemistry is the science treating matter at the atomic to macromolecular scale, the reactions, transformations and aggregations of matter, as well as accompanying energy and entropy changes during these processes. The chemical structure refers to both molecular geometry and to electronic structure. The structural formula of a chemical compound is a graphical representation of the molecular structure showing how the atoms are arranged. A protein structure is the three dimensional coordinates of the atoms within (macro) molecules made of protein.

Architecture is the art and science of designing buildings and structures. An architectural structure is a man-made structure used or intended for supporting or sheltering any use or continuous occupancy. Of various types, the hyperboloid structure is an efficient roof structure leading to the invention of a new system that was innovative both structurally and spatially.

A nonbuilding structure also referred to simply as structures, are those not designed for continuous human occupancy for example a garage, including supporting elements such as roller doors. The term is used by architects and civil engineers to distinctly identify structures that are not buildings. A tent is a shelter, consisting of sheets of fabric or other material draped over or attached to a frame of poles and/or ropes. Some tent styles are free-standing, while others are attached to the ground using guy ropes tied to stakes (pegs).

In architecture and structural engineering, a truss is a structure comprising one or more triangular units which are constructed with straight slender members whose ends are connected at joints. Dormers are structural elements of a building that protrudes from the plane of a sloping roof surface. Structural failure refers to loss of the load-carrying capacity of a component or member within a structure or of the structure itself.

Music is an art form consisting of sound and silence expressed through time. The term musical form, a type of structure, refers to two related concepts:

Social structure is a pattern of relations. They are social organization of individuals and various life. Structures are applicable to people in how a society is as a system organized by a characteristic pattern of relationships. This is known as the social organization of the group. Sociologists have studied the changing structure of theses groups. Structure and agency is the two confronted theories about human behaviour. The debate surrounding the influence of structure and agency on human thought and behaviour is one of the central issues in sociology. In this context "agency" refers to the capacity of individual humans to act independently and to make their own free choices. "Structure" here to those factors such as social class, religion, gender, ethnicity, customs etc. which seem to limit or influence the opportunities that individuals have.