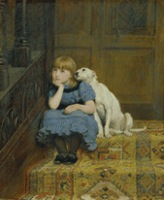 Sympathy is a social affinity in which one person stands with another person, closely understanding his or her feelings. It also can mean being affected by feelings or emotions. Thus the essence of sympathy is that one has a strong concern for the other person.

The psychological state of sympathy is closely linked with that of compassion, empathy and empathic concern. Although empathy and sympathy are often used interchangeably, a subtle variation in ordinary usage can be detected. To empathize is to respond to another's perceived emotional state by experiencing feelings of a similar sort.[1] Sympathy not only includes empathizing (but not always), but also entails having a positive regard or a non- fleeting concern for the other person.[2]

In common usage, sympathy is usually making known one's understanding of another's unhappiness or suffering, especially when it is grief.

Sympathy can also refer to being aware of other (positive) emotions as well.

In a broader sense, it can refer to the sharing of political or ideological sentiments, such as in the phrase "a communist sympathizer".

The word derives from the Greek συμπάθεια (sympatheia)[3], from σύν (syn) "together" and πάθος (pathos) "passion", in this case "suffering" (from πάσχω - pascho, "to be affected by, to suffer").