First of all, please join me in welcoming Daniel Raphael to the Nordan Editorial Advisory Group!

I have rewritten the "Main Page" of the Nordan Symposia to feature access to The Teaching Mission Dialogues, I suspect many of the difficulties persons have found locating the Dialogues will be mitigated. (see wiki stats) The result is likely to be many more persons, most of whom are new and curious, finding the wealth of the Dialogues.

To some extent, I feel like I have been hiding the prominence of the Dialogues in the collection waiting for the storm of sectarianism to blow over. With the passing of Ron Besser, not physically but in the sense of credibility, time is ripe. This corresponds with my sense of a need to re-define the Teaching Mission so as to accommodate any episode of disclosure/revelation, something the Teacher Corps exhibits with ease in contrast to most of the human participants.

wiki stats: these may refer to unique visitors. I will investigate.

p.s. for Daniel's sake, I am enclosing information shared recently regarding response to the Facebook ad experiment.

I spent $20 promoting this 'sutra' on Facebook that has resulted in a large increase of traffic coming to the site. The figures just below are for this past month of April. Given this response, I will do likewise each month. 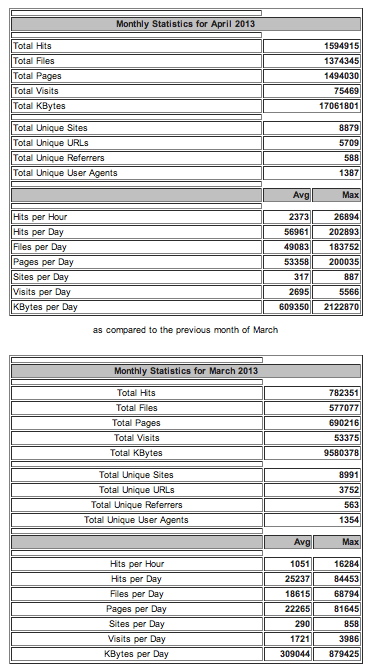 Ah, that explains the mystery of why the Dialogues have been so hard to access. But alas, my friend, I still find the Main Page to be difficult to navigate or understand, and so far I see no direct reference therein to the TM Dialogues as such. For example, none of these passages in this philosophic verbiage refers explicitly to the Dialogues or to the phenomenon, and none of the links provided go to the main page of the Dialogues. I sense and I understand your very strong effort to ensure that the phenomenon is not "reified" or branded with a sectarian name (even the name given it by the celestials themselves), but by virtue of your going so far in that direction, the result IMO is that the Dialogue material is still difficult to understand or access for all but the initiated. Of course, I am glad for the progress shown and ever so grateful for all that you do. (And very impressed with the hit rate on the site!)

Thank you again for sharing your thoughts! I have posted them on the discussion page for future reference.

Teaching Mission enthusiasts like Urantia Book readers or any 'revelatory work' have difficulty thinking of their material as a literary work occurring within a larger evolutionary framework. Perhaps even more difficult to grasp is the dialogue between humanity and divinity that has occurred since the beginning of humankind in one form or another and continues forever. As they are featured by Daynal Institute, we must bear in mind the aspiration of representing the perspective of the Trinity whose vision encompasses all things. As such, the Dialogues are valued more for what they represent than what they are in a literal sense. For this reason, the Dialogues are named in a generic sense on the Nordan Symposia page and could include any written communication that enhances communion with our Source. Indeed, while there are reports of difficulty accessing the Dialogues, stats show a number of successes. I would not be satisfied however, though I wish to operate with an aim to feature the Dialogues in a way that acknowledges their intrinsic value as a function of relationship to other literary works. However, the recent addition of a dedicated url for the Teaching Mission should mitigate any sense of indifference, and where specific terminology unique to TeaM culture is preferred, I would rather utilize such in that domain space.