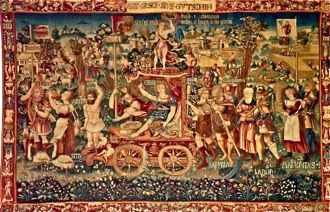 Tapestry is a form of textile art, woven on a vertical loom. It is composed of two sets of interlaced threads, those running parallel to the length (called the warp) and those parallel to the width (called the weft); the warp threads are set up under tension on a loom, and the weft thread is passed back and forth across part or all of the warps. Tapestry is weft-faced weaving, in which all the warp threads are hidden in the completed work, unlike cloth weaving where both the warp and the weft threads may be visible. In tapestry weaving, weft yarns are typically discontinuous; the artisan interlaces each colored weft back and forth in its own small pattern area. It is a plain weft-faced weave having weft threads of different colours worked over portions of the warp to form the design.[1][2]

The success of decorative tapestry can be partially explained by its portability (Le Corbusier once called tapestries "nomadic murals").[3] Kings and noblemen could roll up and transport tapestries from one residence to another. In churches, they could be displayed on special occasions. Tapestries were also draped on the walls of castles for insulation during winter, as well as for decorative display.

In the Middle Ages and Renaissance, a rich tapestry panel woven with symbolic emblems, mottoes, or coats of arms called a "baldachin", canopy of state or cloth of state was hung behind and over a throne as a symbol of authority.[4] The seat under such a canopy of state would normally be raised on a dais.

The iconography of most Western tapestries goes back to written sources, the Bible and Ovid's Metamorphoses being two popular choices. Apart from the religious and mythological images, hunting scenes are the subject of many tapestries produced for indoor decoration.

Tapestries have been used since at least Hellenistic times. Samples of Greek tapestry have been found preserved in the desert of Tarim Basin dating from the 3rd century BC.

Tapestry reached a new stage in Europe in the early fourteenth century AD. The first wave of production originated in Germany and Switzerland. Over time, the craft expanded to France and the Netherlands.

In the 14th and 15th centuries, Arras, France was a thriving textile town. The industry specialised in fine wool tapestries which were sold to decorate palaces and castles all over Europe. Few of these tapestries survived the French Revolution as hundreds were burnt to recover the gold thread that was often woven into them. Arras is still used to refer to a rich tapestry no matter where it was woven.

By the 16th century, Flanders had become the centre of European tapestry production. In the 17th century Flemish tapestries were arguably the most important productions, with many specimens of this era still extant, demonstrating the intricate detail of pattern and colour.

In the 19th century, William Morris resurrected the art of tapestry-making in the medieval style at Merton Abbey. Morris and Company made successful series of tapestries for home and ecclesiatical uses, with figures based on cartoons by Edward Burne-Jones.

Kilims and Navajo Rugs are also types of tapestry work.

Tapestries are still made at the factory of Gobelins and a few other old European workshops, which also repair and restore old tapestries. The craft is also currently practiced by hobbyist weavers.

The term tapestry is also used to describe weft-faced textiles made on Jacquard looms. Until the 1990s, tapestry upholstery fabrics and reproductions of the famous tapestries of the Middle Ages were the most well-known products of Jacquard looms. Since the 1990s, tapestries have re-entered the world of fine art due to a revival of the computerised Jacquard process by artists such as Chuck Close.[5]

Typically, tapestries are translated from the original design via a process resembling paint-by-numbers: a cartoon is divided into regions, each of which is assigned a solid color based on a standard palette. However, in Jacquard weaving, the repeating series of multicolored warp and weft threads can be used to create colors that are optically blended – i.e., the human eye apprehends the threads’ combination of values as a single color.

This method can be likened to pointillism, a style of painting in which tiny dots or points placed in close proximity are optically blended as described above. In fact, pointillism originated from discoveries made in the tapestry medium: the style’s emergence in the 19th century can be traced to the influence of Eugène Chevreul, a French chemist responsible for developing the color wheel of primary and intermediary hues. Chevreul worked as the director of the dye works at Les Gobelins tapestry works in Paris, where he noticed that the perceived color of a particular thread was influenced by its surrounding threads, a phenomenon he called “simultaneous contrast.” Chevreul’s work was a continuation of theories of color elaborated by Leonardo da Vinci and Goethe; in turn, his work influenced painters including Eugène Delacroix and Georges Seurat.

The principles articulated by Chevreul also apply to contemporary television and computer displays, which use tiny dots of red, green and blue (RGB) to render color.[3]