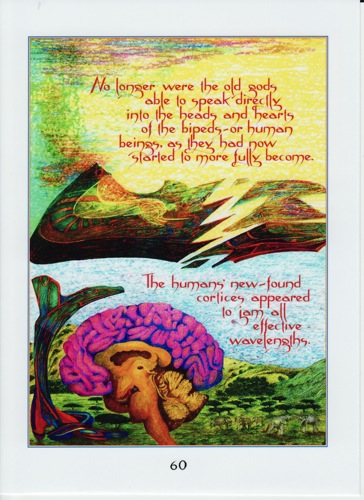 Contemporary cosmologists can now more fully appreciate the dynamics that were starting to polarize opinion between the bureaucrats in the Local System Headquarters. What was to flower a quarter-of-a-million years later into a full-scale rebellion amongst the celestials was still only a whispered general discontent. So, perhaps it can be said the seeds of the dissent that had arisen later between the visitors, or the Prince's Staff, to call them what they called themselves, had already been laid down by the time they arrived.

However, there were few signs of this discontent on the surface, as the visitors settled into their busy life on this strange new world. Having arrived in the waters within sight of the town that was growing fast with a stream of helpers drawn from the natives, Noe decided to keep hir distance. When sHe realized that the visitors appeared to be focussed on their building project to the exclusion of all else, sHe gained the confidence to wriggle closer to the brick walls of the town. There sHe found a massive tree, its crown lofted above the forest canopy, from where sHe could keep a watchful eye on the visitors and what they were doing.

The Prince's Staff, in their tum, happily unaware of Noe's presence, continued in their task of doing their best to upgrade human life. It was clearly a long and tedious process. Even the most intelligent of the natives seemed to be consumed with fear and although the visitors tried to show kindness towards them whatever the provocation, the contact between the two races became increasingly frustrating. There were some individual exceptions, of course, but even those courageous souls, when they were returned to their kin, frequently were killed by their terrified tribe. Those who survived did so through their own cunning and often became the shamans of their people--the intermediaries between human beings and the realm of the spirits.

Regardless of the slow-going, the passing millennia saw a gradual global transformation. New approaches to health and child-rearing had ensured rapid increases in population and the introduction of agriculture had led first to settlements, and then to towns. The visitors taught their students the arts of brick-making, which proved to be very popular and subsequently encouraged an era of city-building. Clustering people together in this way produced a need for new social relationships and the primacy of tribal connections broke down, as individuals from different clans found more profit in dealing fairly with one another. Genocidal wars that had characterized the time before the arrival of the Prince's Staff became of less compelling interest, as the civilizing influence of the visitors took hold. Advances in boat -building also allowed the more adventurous amongst the humans to cross hitherto impassable waters and to spread over unpopulated continents.

The planetary upgrade appeared to be developing in time-honored and orderly fashion. Yet Noe, telepathically sensitive to the emotional well-being of the visitors, detected subtle signals that under the surface all was not well. As for Noe's by-now numerous deceased offspring, their enormous skeletal remains settled into the earth, often becoming fossilized, creating the bedrock of the planet's sacred landscape.