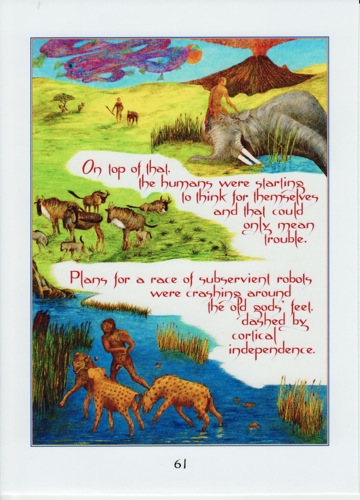 When news of the celestial rebellion finally filtered down to the Prince's Staff, it confirmed for many of them what had become increasingly worrying about the nature and quality of their own lives on the planet. What were they really doing there? Why was so much time and attention spent trying to civilize an unruly and pigheaded species on a small insignificant world far from the center of the action? Why did there have to be so many restrictions on what they were, and were not, able to do? Surely they should be considered mature enough by now to take matters into their own hands and not have to constantly refer back to their superiors for every decision?

More confident now in hir telepathic eavesdropping, Noe listened fascinated as the arguments amongst the visitors grew more heated. Differences soon became irreconcilable, some holding loyally to their cultural mission, whilst the majority of others, sensing new freedoms in the air, decided to strike out on their own. Territories were claimed, and then fought over. Terrible new weapons were introduced by the rebel groups. The reduced number of loyalists were forced to defend themselves, while at the same time attempting to continue with their original mission. Noe watched silently as the situation rapidly deteriorated. No longer was it just the most evolved humans who were drawn to work with the Prince's Staff, but with the rebellion, there were suddenly a number of superhuman beings distributed around the face of the planet, who clearly took pleasure in terrifying the already superstitious, and completely unprepared, local natives. Wars once again ripped through the human populations, now incited by the competing rivalries of the godlike beings who dominated their lives. The high intentions of those who remained true to their mission dissipated over time, as the loyalists amongst the Prince's Staff struggled to control an increasingly chaotic situation.

It should be added, for a fuller appreciation of this sad interlude in early human affairs, that by the time of the rebellion, the Prince's Staff had been considerably enlarged by the progeny of their unions. Some of these puzzling offspring, known later as Midwayers, were even Invisible to the human eye--although, fortunately, not to Noe's sensitive perceptions. These highly intelligent creatures were almost all swayed by the talk of freedom. A large number of them aligned themselves with the rebel factions, acting effectively as espionage agents, since they were able to mix unobserved with opposition forces.

Noe made a mental note that it was the ability of these mysterious agents to move in and out of the ultraviolet range of frequencies, which allowed them to appear and disappear at will, that had provoked such awe in these fearful and superstitious people, and that had left them so sadly vulnerable to exploitation.

This was nothing that Noe had anticipated, or indeed, had ever been warned about, in hir original briefing. Coming from a peace-loving race--personal violence never having been practiced by the Helianx--sHe was continually astonished and horrified by the irrational ferocity of the battling tribes and the ease with which the humans were manipulated by the visitors and their invisible henchmen.