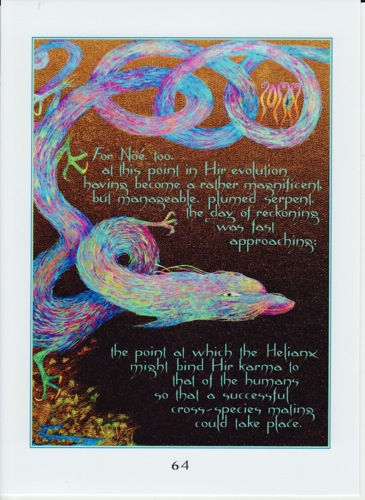 Noe withdrew back into the open ocean in deep thought. The computers had touched on this second off-world mission, but only to tell Noe that the event would act as a signal hir moment was fast approaching. Now, as sHe recalled the briefing, sHe could remember nothing more of significance being said, apart from the generalities that held true for all planetary missions of biological upliftment.

In their extensive intergalactic travels the Helianx had made a point of not revealing themselves to any planetary population in the early stages of their evolution. The space gypsies were able to assess from their out-of-the-body observations at what point a world's people had reached in its progress towards settlement in Light and Life, and this had allowed them to avoid even a hint of unauthorized interference.

If there was one thing that all intelligent species have learned on their own planets in their long struggle towards peaceful coexistence, it would have to be the need to exercise considerable caution whenever a more developed culture has stumbled on a less evolved one. They would have observed for themselves the negative impact of their presence on the more primitive of their own peoples, since early planetary populations are invariably composed of different races, often endowed with very different abilities.

In the relatively rare event of a space-faring race encountering a world at a more primitive stage of development, the protocols of engagement forbidding any direct contact always held true unless specifically sanctioned by MA. An exception was made only when a particularly belligerent species showed signs of putting its weapons into space, endangering life on nearby planets. In those cases it was regarded as perfectly permissible to disable the threatening technology. In fact, it had become something of an amiable competition between different interested parties to come up with original, and often humorous, ways of confusing and mystifying the warlike race in question before it could do any real damage.

Fortunately, the immense distances of interstellar space and the relatively short lifespans of most species ensured that only the most mature races were able to develop the capability of interplanetary travel. Whatever technology was used, the enormous commitment of time and resources required to develop a craft capable of traversing these distances, invariably spoke of many generations of peaceful cooperation and shared intention. Of course, there were some rare exceptions to this; warrior species seeking to dominate, or colonize, nearby planets, but even on those rare occasions they have been permitted to leave their planet, there is no record of them ever being able to travel outside their solar systems.

When an authorized intervention, such as that attempted by the Prince's Staff, had resulted in such unintended and difficult consequences, MA regarded this as a tacit warning to the increasing number of off-planet races who had become suddenly very interested in this world. Celestial uprisings were so infrequent in a benign and well-regulated Multiverse, that the act of isolating rebellious planets was bound to produce some unexpected and intriguing transformations in the indigenous populations.