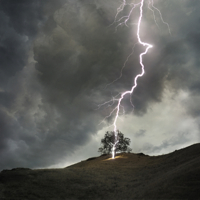 Thunder is the sound made by lightning. Depending on the nature of the lightning and distance of the listener, thunder can range from a sharp, loud crack to a long, low rumble (brontide). The sudden increase in pressure and temperature from lightning produces rapid expansion of the air surrounding and within a bolt of lightning. In turn, this expansion of air creates a sonic shock wave which produces the sound of thunder, often referred to as a clap, crack, or peal of thunder. The distance of the lightning can be calculated by the listener based on the time interval from when the lightning is seen to when the sound is heard.

The cause of thunder has been the subject of centuries of speculation and scientific inquiry. The first recorded theory is attributed to the Greek philosopher Aristotle in the third century BC, and an early speculation was that it was caused by the collision of clouds. Subsequently, numerous other theories have been proposed. By the mid-19th century, the accepted theory was that lightning produced a vacuum. In the 20th century a consensus evolved that thunder must begin with a shock wave in the air due to the sudden thermal expansion of the plasma in the lightning channel. The temperature inside the lightning channel, measured by spectral analysis, varies during its 50 μs existence, rising sharply from an initial temperature of about 20,000 K to about 30,000 K, then dropping away gradually to about 10,000 K. The average is about 20,400 K (20,100 °C; 36,300 °F). This heating causes it to expand outward, plowing into the surrounding cooler air at a speed faster than sound would travel in that cooler air. The outward-moving pulse that results is a shock wave, similar in principle to the shock wave formed by an explosion, or at the front of a supersonic aircraft. More recently, the consensus around the cause of the shock wave has been eroded by the observation that measured overpressures in simulated lightning are greater than could be achieved by the amount of heating found. Alternative proposals rely on electrodynamic effects of the massive current acting on the plasma in the bolt of lightning. This shockwave is sufficient to cause injury, such as internal contusion, to individuals nearby.

A flash of lightning, followed after some seconds by a rumble of thunder is, for many people, the first illustration of the fact that sound travels significantly slower than light. Using this difference, one can estimate how far away the bolt of lightning is by timing the interval between seeing the flash and hearing thunder. The speed of sound in dry air is approximately 343 m/s or 1,127 feet per second or 768 mph (1,236 km/h) at 20°C (68 °F). However, this figure can only be used as an approximation of the speed of a thunder-clap, as you are unlikely to find dry air in a thunderstorm.

The speed of light is high enough that it can be taken as infinite in this calculation because of the relatively small distance involved. Therefore, the lightning is approximately one kilometer distant for every 2.9 seconds that elapse between the visible flash and the first sound of thunder (or one mile for every 4.6 seconds). In the same five seconds, the light could have traveled the same distance as circling the globe 37 times. Thunder is seldom heard at distances over 20 kilometers (12 miles). A very bright flash of lightning and a simultaneous sharp "crack" of thunder, a thundercrack, therefore indicates that the lightning strike was very near.