Transcription is the conversion into written, typewritten or printed form, of a spoken language source, such as the proceedings of a court hearing. It can also mean the conversion of a written source into another medium, such as scanning books and making digital versions. A transcriber is a person who performs transcriptions.

In a strict linguistic sense, transcription is the process of matching the sounds of human speech to special written symbols using a set of exact rules, so that these sounds can be reproduced later.

Transcription as a mapping from sound to script must be distinguished from transliteration, which creates a mapping from one script to another that is designed to match the original script as directly as possible.

In this table IPA is an example of phonetic transcription of the name of the former Russian president known in English as Boris Yeltsin, followed by accepted hybrid forms in various languages. Note that 'Boris' is a transliteration rather than transcription in strict sense. 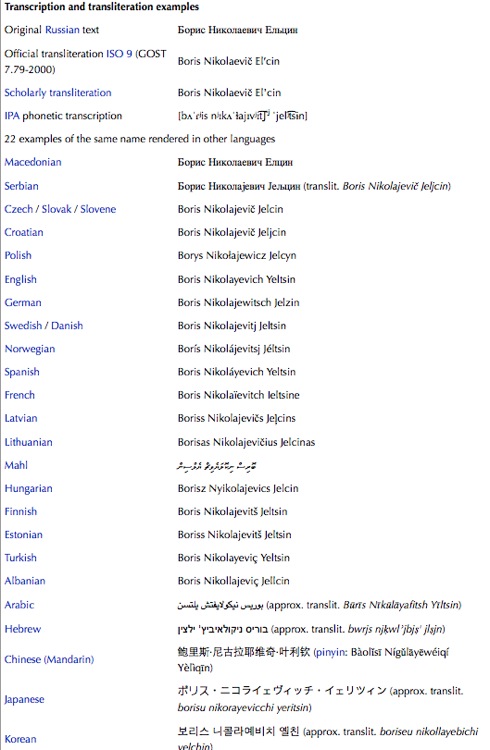 The same words are likely to be transcribed differently under different systems. For example, the Mandarin Chinese name for the capital of the People's Republic of China is Beijing in the commonly-used contemporary system Hanyu Pinyin, and in the historically significant Wade Giles system, it is written Pei-Ching.

Practical transcription can be done into a non-alphabetic language too. For example, in a Hong Kong Newspaper, George Bush's name is transliterated into two Chinese characters that sounds like "Bou-sū" (布殊) by using the characters that mean "cloth" and "special". Similarly, many words from English and other Western European languages are borrowed in Japanese and are transcribed using Katakana, one of the Japanese syllabaries.

After transcribing a word from one language to the script of another language:

This is especially evident for Greek loan words and proper names. Greek words are normally first transcribed to Latin (according to their old pronunciations), and then loaned into other languages, and finally the loan word has developed according to the rules of the target language. For example, Aristotle is the currently used English form of the name of the philosopher whose name in Greek is spelled ̓Aριστoτέλης (Aristotélēs), which was transcribed to Latin Aristóteles, from where it was loaned into other languages and followed their linguistic development.(In "classical" Greek of Aristotle's time, lower-case letters were not used, and the name was spelled ΑΡΙΣΤΟΤΕΛΗΣ.)

Pliocene comes from the Greek words πλεîον (pleîon, "more") and καινóς (kainós, "new"), which were first transcribed (Latinised) to plion and caenus and then loaned into other languages. The historic latinization of <κ> by <c> stems from a time when Latin pronounced <c> as [k] in all contexts.

When this process continues over several languages, it may fail miserably in conveying the original pronunciation. One ancient example is the Sanskrit word dhyāna which transcribed into the Chinese word Ch'an through Buddhist scriptures. Ch'an (禪 Zen Buddhism) was transcribed from Japanese (ゼン zen) to Zen in English. dhyāna to Zen is quite a change.

Another complex problem is the subsequent change in "preferred" transcription. For instance, the word describing a philosophy or religion in China was popularized in English as Tao and given the termination -ism to produce an English word Taoism. That transcription reflects the Wade-Giles system. More recent Pinyin transliterations produce Dao and Daoism.