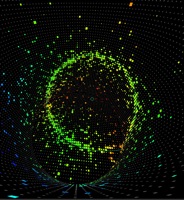 The ultimaton is the basic unit of materialized energy, the first measurable form of energy and has Paradise as its nucleus. Mutual attraction holds one hundred ultimatons together in the constitution of the electron; and there are never more nor less than one hundred ultimatons in a typical electron. The loss of one or more ultimatons destroys typical electronic identity, thus bringing into existence one of the ten modified forms of the electron.

While atoms and electrons are subject to gravity, the ultimatons are not subject to local gravity, the interplay of material attraction, but they are fully obedient to absolute or Paradise gravity, to the trend, the swing, of the universal and eternal circle of the universe of universes. Ultimatonic energy does not obey the linear or direct gravity attraction of near-by or remote material masses, but it does ever swing true to the circuit of the great ellipse of the far-flung creation.

The power centers and their associates are much concerned in the work of transmuting the ultimaton into the circuits and revolutions of the electron. These unique beings control and compound power by their skillful manipulation of the basic units of materialized energy, the ultimatons. They are masters of energy as it circulates in this primitive state. In liaison with the physical controllers they are able to effectively control and direct energy even after it has transmuted to the electrical level, the so-called electronic stage. But their range of action is enormously curtailed when electronically organized energy swings into the whirls of the atomic systems. Upon such materialization, these energies fall under the complete grasp of the drawing power of linear gravity.

Ultimatons exhibit measurable rays at their borderland revolutions where they begin to assume definite form. This is the first stage of emergent energy in which wavelike phenomena can be detected and measured. The assembly of energy into the minute spheres of the ultimatons occasions vibrations in the content of space which are discernible and measurable. And long before physicists ever discover the ultimaton, they will undoubtedly detect the phenomena of these rays as they shower in upon Urantia. These short and powerful rays represent the initial activity of the ultimatons as they are slowed down to that point where they veer towards the electronic organization of matter. As the ultimatons aggregate into electrons, condensation occurs with a consequent storage of energy.