From Nordan Symposia
Revision as of 17:27, 5 March 2010 by Rdavis (talk | contribs) (Created page with 'File:lighterstill.jpgright|frame '''Van''', "the Steadfast", was a member of the 100 repersonalized ascendant souls serving as support...')
(diff) ← Older revision | Latest revision (diff) | Newer revision → (diff)
Jump to navigationJump to search 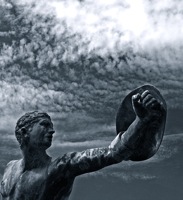 Van, "the Steadfast", was a member of the 100 repersonalized ascendant souls serving as support staff to Caligastia, the onetime Planetary Prince of Urantia. He served as director of the supreme court of tribal co-ordination and racial co-operation that functioned as the court of appeals for the other nine special commissions of the Prince's staff charged with the supervision of human affairs. He distinguished himself when

shortly after Satan' s inspection and when the planetary administration was on the eve of the realization of great things on Urantia, one day, midwinter of the northern continents, Caligastia held a prolonged conference with his associate, Daligastia, after which the latter called the ten councils of Urantia in session extraordinary. This assembly was opened with the statement that Prince Caligastia was about to proclaim himself absolute sovereign of Urantia and demanded that all administrative groups abdicate by resigning all of their functions and powers into the hands of Daligastia as trustee, pending the reorganization of the planetary government and the subsequent redistribution of these offices of administrative authority.

The presentation of this astounding demand was followed by the masterly appeal of Van, chairman of the supreme council of co-ordination. This distinguished administrator and able jurist branded the proposed course of Caligastia as an act bordering on planetary rebellion and appealed to his conferees to abstain from all participation until an appeal could be taken to Lucifer, the System Sovereign of Satania; and he won the support of the entire staff. Accordingly, appeal was taken to Jerusem, and forthwith came back the orders designating Caligastia as supreme sovereign on Urantia and commanding absolute and unquestioning allegiance to his mandates. And it was in reply to this amazing message that the noble Van made his memorable address of seven hours' length in which he formally drew his indictment of Daligastia, Caligastia, and Lucifer as standing in contempt of the sovereignty of the universe of Nebadon; and he appealed to the Most Highs of Edentia for support and confirmation.

Meantime the system circuits had been severed; Urantia was isolated. Every group of celestial life on the planet found itself suddenly and without warning isolated, utterly cut off from all outside counsel and advice.

Daligastia formally proclaimed Caligastia "God of Urantia and supreme over all." With this proclamation before them, the issues were clearly drawn; and each group drew off by itself and began deliberations, discussions destined eventually to determine the fate of every superhuman personality on the planet.

Seraphim and cherubim and other celestial beings were involved in the decisions of this bitter struggle, this long and sinful conflict. Many superhuman groups that chanced to be on Urantia at the time of its isolation were detained here and, like the seraphim and their associates, were compelled to choose between sin and righteousness—between the ways of Lucifer and the will of the unseen Father.

For more than seven years this struggle continued. Not until every personality concerned had made a final decision, would or did the authorities of Edentia interfere or intervene. Not until then did Van and his loyal associates receive vindication and release from their prolonged anxiety and intolerable suspense.

The followers of Van early withdrew to the highlands west of India, where they were exempt from attacks by the confused races of the lowlands, and from which place of retirement they planned for the rehabilitation of the world as their early Badonite predecessors had once all unwittingly worked for the welfare of mankind just before the days of the birth of the Sangik tribes.

Before the arrival of the Melchizedek receivers, Van placed the administration of human affairs in the hands of ten commissions of four each, groups identical with those of the Prince's regime. The senior resident Life Carriers assumed temporary leadership of this council of forty, which functioned throughout the seven years of waiting. Similar groups of Amadonites assumed these responsibilities when the thirty-nine loyal staff members returned to Jerusem.

These Amadonites were derived from the group of 144 loyal Andonites to which Amadon belonged, and who have become known by his name. This group comprised thirty-nine men and one hundred and five women. Fifty-six of this number were of immortality status, and all (except Amadon) were translated along with the loyal members of the staff. The remainder of this noble band continued on earth to the end of their mortal days under the leadership of Van and Amadon. They were the biologic leaven which multiplied and continued to furnish leadership for the world down through the long dark ages of the postrebellion era.

Van was left on Urantia until the time of Adam, remaining as titular head of all superhuman personalities functioning on the planet. He and Amadon were sustained by the technique of the tree of life in conjunction with the specialized life ministry of the Melchizedeks for over one hundred and fifty thousand years.

The affairs of Urantia were for a long time administered by a council of planetary receivers, twelve Melchizedeks, confirmed by the mandate of the senior constellation ruler, the Most High Father of Norlatiadek. Associated with the Melchizedek receivers was an advisory council consisting of: one of the loyal aids of the fallen Prince, the two resident Life Carriers, a Trinitized Son in apprenticeship training, a volunteer Teacher Son, a Brilliant Evening Star of Avalon (periodically), the chiefs of seraphim and cherubim, advisers from two neighboring planets, the director general of subordinate angelic life, and Van, the commander in chief of the midway creatures. And thus was Urantia governed and administered until the arrival of Adam. It is not strange that the courageous and loyal Van was assigned a place on the council of planetary receivers which for so long administered the affairs of Urantia.

The twelve Melchizedek receivers of Urantia did heroic work. They preserved the remnants of civilization, and their planetary policies were faithfully executed by Van. Within one thousand years after the rebellion he had more than three hundred and fifty advanced groups scattered abroad in the world. These outposts of civilization consisted largely of the descendants of the loyal Andonites slightly admixed with the Sangik races, particularly the blue men, and with the Nodites.

Notwithstanding the terrible setback of rebellion there were many good strains of biologic promise on earth. Under the supervision of the Melchizedek receivers, Van and Amadon continued the work of fostering the natural evolution of the human race, carrying forward the physical evolution of man until it reached that culminating attainment which warranted the dispatch of a Material Son and Daughter to Urantia.

Van and Amadon remained on earth until shortly after the arrival of Adam and Eve. Some years thereafter they were translated to Jerusem, where Van was reunited with his waiting Adjuster. Van now serves in behalf of Urantia while awaiting the order to go forward on the long, long trail to Paradise perfection and the unrevealed destiny of the assembling Corps of Mortal Finality.

It should be recorded that, when Van appealed to the Most Highs of Edentia after Lucifer had sustained Caligastia on Urantia, the Constellation Fathers dispatched an immediate decision sustaining Van on every point of his contention. This verdict failed to reach him because the planetary circuits of communication were severed while it was in transit. Only recently was this actual ruling discovered lodged in the possession of a relay energy transmitter where it had been marooned ever since the isolation of Urantia. Without this discovery, made as the result of the investigations of the Urantia midwayers, the release of this decision would have awaited the restoration of Urantia to the constellation circuits. And this apparent accident of interplanetary communication was possible because energy transmitters can receive and transmit intelligence, but they cannot initiate communication.

The technical status of Van on the legal records of Satania was not actually and finally settled until this ruling of the Edentia Fathers was recorded on Jerusem.[1]