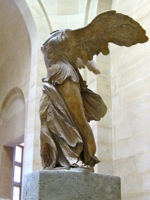 In mythology, victory is often deified, as in Greek Nike or Roman Victoria. Archetypical victories of good over evil, or of light over dark etc. are a recurring theme in mythology and fairy tales. The victorious agent is a hero, often portrayed as engaging in hand-to-hand combat with a monster (as Saint George slaying the dragon, Indra slaying Ahi, Thor slaying the Midgard Serpent etc.). Sol invictus ("Sun invincible") of Roman mythology became an epithet of Christ in Christian mythology. The resurrection of Christ is presented as a victory over Death and Sin by [[Paul, the Apostle|Paul of Tarsus] (1 Corinthians 15:55; see also Jesus Christ in comparative mythology).