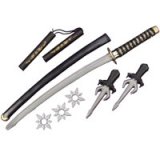 A weapon is a tool used with the aim of causing damage or harm (either physical or mental) to living beings or artificial structures or systems. In human society weapons are used to increase the efficacy and efficiency of tasks such as hunting, fighting, the committing of criminal acts, the preserving of law and order, and the waging of war.

Weapons are employed individually or collectively. A weapon can be either expressly designed as such or an item. re-purposed through use (for example, hitting someone with a hammer), their form can range from simple implements such as clubs through to complicated modern implementations such as intercontinental ballistic missiles and biological weapons. Weapon development has progressed from early wood or stone clubs through revolutions in metalworking (swords, maces, etc.) and gunpowder (guns, cannon), electronics and nuclear technology.

In a broader context, weapons may be construed to include anything used to gain a strategic, material or mental advantage over an adversary on land, sea, air, or even outer space.[1]