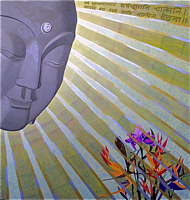 2. That which is uttered or stated in support of a fact or statement; evidence given. Obs.

3. Attestation (of a document). Chiefly in phr. in or into (the) witnessing of = F. en témoignage de.

4. The fact of being present and observing something. So witnessing ppl.

5. a. One who is called on, selected, or appointed to be present at a transaction, so as to be able to testify to its having taken place: spec. one who is present at the execution of a document and subscribes it in attestation thereof; more definitely, attesting or subscribing witness. Often in formulæ corresponding to med.L. teste me ipso, teste rege, his testibus, etc., AF. tesmoin...

b. A sponsor or godparent at baptism. Obs. orig. in Puritan use.

For lessons on the topic of Evangelism, follow this link.

b. In asseverative formulæ, in which a deity or a human being is invoked as one who is cognizant of a fact; as God is my witness, be my witness that... Most often in phr. to call or take to (one's) witness: to call upon or appeal to as one's surety; to swear by.

c. Referring to, usually introducing, the designation of an authority for a statement. (Cf. 7b.)

b. Introducing a name, designation, phrase, or clause denoting a person or thing that furnishes evidence of the fact or exemplifies the statement. Also as witness, and, in early use, witness on. (After L. teste..., F. témoin...)

c. spec. In textual criticism, a manuscript or an early version which is regarded as evidence of authority for the text. (Usually in pl.)