From Nordan Symposia
(Redirected from Amalgamated)
Jump to navigationJump to search 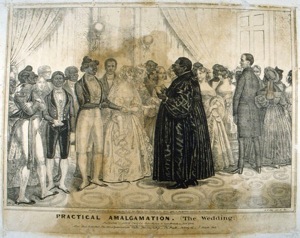 The term amalgamation was derived from metallurgy (see amalgam). It has been linked to the metaphor of the melting pot, which also originated in the US, and which described the cultural assimilation and intermarriage of different ethnicities. The intermarriage of whites with African Americans and, to a lesser degree, other non-whites was until recently in social disfavor in the United States, despite the long history of informal liaisons between white men and nonwhite women during the long years of slavery and after emancipation. Until 1967, interracial marriages were prohibited in many US states through anti-miscegenation laws.