From Nordan Symposia
(Redirected from Associative)
Jump to navigationJump to search 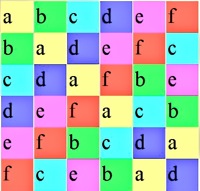 In mathematics, associativity is a property of some binary operations. It means that, within an expression containing two or more occurrences in a row of the same associative operator, the order in which the operations are performed does not matter as long as the sequence of the operands is not changed. That is, rearranging the parentheses in such an expression will not change its value. Consider for instance the equation

Associativity is not to be confused with commutativity. Commutativity justifies changing the order or sequence of the operands within an expression while associativity does not. For example,

is an example of associativity because the parentheses were changed (and consequently the order of operations during evaluation) while the operands 5, 2, and 1 appeared in the exact same order from left to right in the expression.

is not an example of associativity because the operand sequence changed when the 2 and 5 switched places.

Associative operations are abundant in mathematics; in fact, many algebraic structures (such as semigroups and categories) explicitly require their binary operations to be associative.

However, many important and interesting operations are non-associative; one common example would be the vector cross product.[1]