From Nordan Symposia
(Redirected from Avonals)
Jump to navigationJump to search 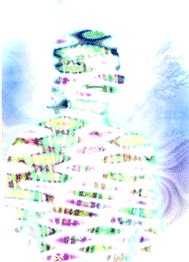 Every time an original and absolute concept of being formulated by the Eternal Son unites with a new and divine ideal of loving service conceived by the Infinite Spirit, a new and original Son of God, a Paradise Magisterial Son, is produced. These Sons constitute the order of Avonals in contradistinction to the order of Michael, the Creator Sons. Though not creators in the personal sense, they are closely associated with the Michaels in all their work. The Avonals are planetary ministers and judges, the magistrates of the time-space realms--of all races, to all worlds, and in all universes.

We have reasons for believing that the total number of Magisterial Sons in the grand universe is about one billion. They are a self-governing order, being directed by their supreme council on Paradise, which is made up of experienced Avonals drawn from the services of all universes. But when assigned to, and commissioned in, a local universe, they serve under the direction of the Creator Son of that domain.

Avonals are the Paradise Sons of service and bestowal to the individual planets of the local universes. And since each Avonal Son has an exclusive personality, since no two are alike, their work is individually unique in the realms of their sojourn, where they are often incarnated in the likeness of mortal flesh and sometimes are born of earthly mothers on the evolutionary worlds.

For lessons on the topic of Avonal Sons, follow this link.

In addition to their services on the higher administrative levels, the Avonals have a threefold function on the inhabited worlds:

1. Judicial Actions. They act at the close of the planetary dispensations. In time, scores--hundreds--of such missions may be executed on each individual world, and they may go to the same or to other worlds times without number as dispensation terminators, liberators of the sleeping survivors.

2. Magisterial Missions. A planetary visitation of this type usually occurs prior to the arrival of a bestowal Son. On such a mission an Avonal appears as an adult of the realm by a technique of incarnation not involving mortal birth. Subsequent to this first and usual magisterial visit, Avonals may repeatedly serve in a magisterial capacity on the same planet both before and after the appearance of the bestowal Son. On these additional magisterial missions an Avonal may or may not appear in material and visible form, but on none of them will he be born into the world as a helpless babe.

3. Bestowal Missions. The Avonal Sons do all, at least once, bestow themselves upon some mortal race on some evolutionary world. Judicial visits are numerous, magisterial missions may be plural, but on each planet there appears but one bestowal Son. Bestowal Avonals are born of woman as Michael of Nebadon was incarnated on Urantia.

There is no limit to the number of times the Avonal Sons may serve on magisterial and on bestowal missions, but usually, when the experience has been seven times traversed, there is suspension in favor of those who have had less of such service. These Sons of multiple bestowal experience are then assigned to the high personal council of a Creator Son, thus becoming participants in the administration of universe affairs.

In all their work for and on the inhabited worlds, the Magisterial Sons are assisted by two orders of local universe creatures, the Melchizedeks and the archangels, while on bestowal missions they are also accompanied by the Brilliant Evening Stars, likewise of origin in the local creations. In every planetary effort the secondary Paradise Sons, the Avonals, are supported by the full power and authority of a primary Paradise Son, the Creator Son of their local universe of service. To all intents and purposes their work on the inhabited spheres is just as effective and acceptable as would have been the service of a Creator Son upon such worlds of mortal habitation.[1]