From Nordan Symposia
(Redirected from Decreed)
Jump to navigationJump to search 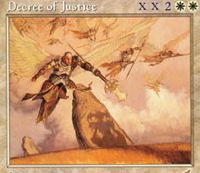 Middle English, from Anglo-French decré, from Latin decretum, from neuter of decretus, past participle of decernere to decide, from de- + cernere to sift, decide

b : a judicial decision especially in an equity or probate court

A decree is a rule of law issued by a head of state (such as the president of a republic), according to certain procedures (usually established in a constitution). It has the force of law. The particular term used for this concept may vary from country to country—the executive orders made by the President of the United States, for example, are decrees (although a decree is not exactly an order). In non-legal English usage, however, the term refers to any authoritarian decision and, in this sense, it is often derogatory.