From Nordan Symposia
(Redirected from Depressed)
Jump to navigationJump to search 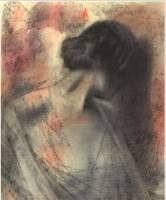 In a modern context, "melancholy" applies only to the mental or emotional symptoms of depression or despondency; historically, "melancholia" could be physical as well as mental, and melancholic conditions were classified as such by their common cause rather than by their properties.[1]

Similarly, melancholia in ancient usage also encompassed mental disorders which might now be classed as schizophrenias or bipolar disorders.[1]