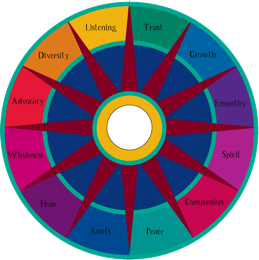 A Divine Counselor is listed as an author of several of The Urantia Papers. Otherwise, they may be found to function in a judicial capacity throughout the Grand Universe.

When we speak of executive and deliberative branches of the Uversa government, you may, from the analogy of certain forms of Urantian civil government, reason that we must have a third or judicial branch, and we do; but it does not have a separate personnel. Our courts are constituted as follows: There presides, in accordance with the nature and gravity of the case, an Ancient of Days, a Perfector of Wisdom, or a Divine Counselor. The evidence for or against an individual, a planet, system, constellation, or universe is presented and interpreted by the Censors. The defense of the children of time and the evolutionary planets is offered by the Mighty Messengers, the official observers of the superuniverse government to the local universes and systems. The attitude of the higher government is portrayed by Those High in Authority. And ordinarily the verdict is formulated by a varying-sized commission consisting equally of Those without Name and Number and a group of understanding personalities chosen from the deliberative assembly. [1]

Presented by a Divine Counselor, a member of a group of celestial personalities assigned by the Ancients of Days on Uversa, the headquarters of the seventh superuniverse, to supervise those portions of this forthcoming revelation which have to do with affairs beyond the borders of the local universe of Nebadon. I am commissioned to sponsor those papers portraying the nature and attributes of God because I represent the highest source of information available for such a purpose on any inhabited world. I have served as a Divine Counselor in all seven of the superuniverses and have long resided at the Paradise center of all things. Many times have I enjoyed the supreme pleasure of a sojourn in the immediate personal presence of the Universal Father. I portray the reality and truth of the Father's nature and attributes with unchallengeable authority; I know whereof I speak. [2]

In Law and Politics

The word counseling or counselling comes from the Middle English counseil, from Old French conseil, from Latin cōnsilium; akin to cōnsulere, to take counsel, consult.

There are probably as many definitions of counseling as there are practitioners to describe it. The term was originally used by Frank Parsons in 1908. It was adopted by Carl Rogers in response to widespread prejudice in the USA against lay therapists and also because he was not then permitted by the psychiatry profession to call himself a psychotherapist. The difference between definitions of counseling and psychotherapy is less significant that the practitioners' perceptions of their Raison d'être.

Difference between coaching, counseling and psychotherapy

Coaching tends to be future orientated, goal focused and asks the client to be accountable to themselves. Counseling tends to be oriented in equal measure to the past, present and future as well as problem and solution focused but less on psychopathology than psychotherapy. Psychotherapy tends to deal more with seriously disturbed individuals such as those with depression, anxiety or personality disorder. This distinction is not hard and fast however, as in both common and professional usage counseling and psychotherapy are interchangeable, whilst coaching is perceived as different and limited to sports coaching, yet includes therapeutic coaching in its realm. This leads to confusion for both customers and practitioners in a complex service industry that now includes marriage mentoring, for example. The differences are usually to do with the type of training, accreditation and special interests of each type of coach, counselor or psychotherapist.

Coaching arose from management consultancy and leadership training, and has grown into traditional counseling and psychotherapy fields such as conflict coaching and systemic coaching. Coaching and counseling tend to arise from a humanistic and client-centered approach. Counselors attend to both normal social, cultural and developmental issues as well as the problems associated with physical, emotional, and mental disorders. These are nonpathologizing views of the person in context. A vital ingredient is their view that coaching and counseling are a meeting between practitioner and client, which invites the creative possibilities of dialogue in contrast to treatment of a disorder and in mentoring, a partnership of colleagues of greater and lesser experience. Many personal coaches and counselors use movement, psychodynamic and cognitive-behavioral approaches in their work, usually integrating these aspects into the process when appropriate and beneficial to their client.

Coaching, psychotherapy and counseling all encourage self help as a resource for change, but to different degrees. For example, will a person believed to be suffering a mental disorder think about self-help in a disordered way - using aluminum foil wrapping of the skull to prevent their thoughts being broadcast to a television set, for example. This could be considered disordered self-help. By contrast, in an approach that does not pathologize the person, the practitioner is unlikely to pathologize the client's self help strategy and some may even research the science of experience to find information about the effectiveness of a skullcap.

Coaching, psychotherapy and counseling, taken together and used together represent an ecletic approach and serve as perhaps the best approach when taken together, since clients come from various backgrounds and circumstances and represent different needs and issues.

What a counselor usually does