There is a common belief that evolution and religion, Darwinian evolution and Christianity especially, are world pictures that are forever opposed. This is a belief today endorsed and promulgated both by extreme evangelical Christians (who support some version of Biblical literalism) and ardent ultra-Dawinians (who hold that their theory necessarily falls into an atheistic mode of thinking). Traditionally, however, this opposition has not been universally accepted. Many people find that there is much in common between the two systems and, thus, great opportunities for sympathetic dialogue. Much of the difficulty and debate arises from ignorance about the various positions involved. In discussing the idea of selection, it is convenient to make a three-fold distinction between the fact of evolution, the path of evolution, and the theory or mechanism of evolution.

The fact of evolution 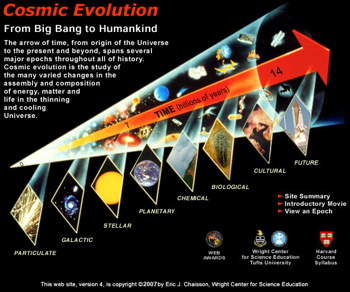 Claims for the fact of evolution were first mooted in the seventeenth century with the extension of Newtonian ideas from the mere running of the universe to its supposed development through natural laws. It was later argued—by, among others, Immanuel Kant—that this happened in a regular fashion as suns and planets were formed from gaseous nebulae. Biological evolutionary ideas began to appear towards the end of the eighteenth century. A prominent exponent in England was the physician and naturalist Erasmus Darwin, grandfather of Charles Darwin; in France a little later the chief advocate of the idea was the biologist Jean Baptiste de Lamarck.

The evidence offered for evolution (then more generally called transmutation) tended to be anecdotal. A major reason why few endorsed the idea with enthusiasm was that it was seen to be a reflection of the ideology of progress—upward change in the human social world, and upward change in the history of life, from "monad" to "man." Critics, like the father of comparative anatomy, the French biologist Georges Cuvier, found the idea religiously offensive less because it clashed with literal interpretations of the Bible than because of its underlying philosophy of progress. Such a world picture, in which humans can make the difference unaided, was at odds with the Christian notion of providence, where all depends on God's grace. Although by the mid nineteenth century religious worries were still much in evidence, Charles Darwin met this challenge head on in the Origin of Species (1859), the groundbreaking work in which he introduced his theory. Darwin was not the first to argue for the fact of evolution, but by marshaling so much evidence from paleontology, embryology, geographical distributions, and more, he made the fact of evolution empirically plausible and no longer reliant on an underlying social philosophy for acceptance. The path of evolution

The path of evolution

Traditionally, life is pictured as a tree with contemporary organisms at the ends of the upper branches. However, Lamarck and some other early evolutionists thought that life developed upwards in separate but parallel lines, with variations laid over these. Alternatively, some researcher believe that viruses may carry genes from one line to other, very different, lines, so perhaps a better picture is that of a net. Paradoxically, the main outlines of the history of life were worked out in the first part of the nineteenth century, primarily by those who did not subscribe to evolution, and only later was the process of life given an evolutionary interpretation.

The theory or mechanism of evolution

The theory or mechanism of evolution has garnered many hypotheses. Notorious before Darwin was Lamarck's idea of the inheritance of acquired characteristics, which had not originated with him; Erasmus Darwin had accepted it, as did Charles Darwin much later. In the Origin of Species, Darwin described the mechanism that is generally accepted as the chief force for change: natural selection. More organisms are born than can survive and reproduce, leading to a struggle for survival and, more importantly, reproduction. Given naturally occurring variation, and the fact that those that survive will tend on average to be different from those that do not, there will be a differential reproduction, natural selection. In time this leads to full-blown evolution, and evolution of a particular kind, for selection produces organisms with adaptations. The eye and the hand come naturally as a result of Darwin's causal process.

In the years subsequent to the publication of Darwin's Origin, there have been a multitude of putative alternatives to Darwinian selection, including orthogenesis (a life force driving things), mutationism (major one-step changes), genetic drift (randomness), and molecular drive (DNA has its own built-in ways of change); none has established itself as a full and genuine rival to natural selection. This is not to say that all controversy is therefore quelled. Apart from the question of whether selection can be applied profitably to such issues as the origin of life, there are also questions about the form that life's history will take given selection as the main mechanism of change. Will it be smooth and gradual (phyletic gradualism), as supposed by Darwin and his followers, or will it be jerky and abrupt (punctuated equilibria), as supposed by some leading paleontologists, notably Stephen Jay Gould? Controversy about these issues, however, should not be taken as controversy about other matters. The fact of evolution is firmly established, the main outlines of the path of evolution have been worked out and details are being filled in (for example, that birds are descended from dinosaurs), and selection is taken to be the major mechanism of change even though there are debates about its applicability and its precise results and consequences.

Evolution as fact, path, and theory is a thriving part of the biological sciences, and it is also seen to have extensions and implications for thinking about many other parts of human experience. Social scientists are increasingly turning to evolutionary ideas to flesh out their understanding of human nature and society; philosophers have (after many hesitations) begun to see how evolution, selection even, can profitably deepen their understandings of epistemology (theory of knowledge) and ethics (theory of morality); novelists and poets use evolutionary themes to illuminate aspects of human understanding and motivation; linguists turn to Darwinism for help in grasping the developments of languages; and so it is in many other subjects and disciplines. Although there is still much opposition to evolutionary ideas on various religious fronts, there is realization by theologians and historians that the old story of the warfare between science and religion was much overblown, and many see evolution as an aid to faith and understanding rather than a hindrance.

Bowler, Peter. Evolution: The History of an Idea. Berkeley: University of California Press, 1984.

Ruse, Michael. Can a Darwinian be a Christian? The Relationship Between Science and Religion. Cambridge, UK: Cambridge University Press, 2001.