From Nordan Symposia
(Redirected from Incarnated)
Jump to navigationJump to search

Incarnation which means embodied in flesh, refers to the conception and birth of a sentient creature (generally a human) who is the material manifestation of an entity or force whose original nature is immaterial.

For lessons on the topic of Incarnation, follow this link.

In its religious context the word is used to mean the descent of a divine being or the Supreme Being (God) in human form on Earth. While Christianity, Hinduism and Buddhism are perhaps the most widely-known traditions to employ this concept within the context of their respective belief systems, they are by no means the only ones to do so.

1. a. trans. To cover with flesh, cause flesh to grow upon or in, heal over (a wound or sore).

b. absol. To cause flesh to grow; to induce healing.

c. intr. To become covered with flesh, to heal.

1. The action of incarnating or fact of being incarnated or ‘made flesh’; a becoming incarnate; investiture or embodiment in flesh; assumption of, or existence in, a bodily (esp. human) form. a. spec. of Christ, or of God in Christ. Often absol. the Incarnation. (The earliest and still the prevalent sense. In early use often in reference to the Christian era: the date of the incarnation or birth of Christ.)

b. In general sense.

c. fig. The putting into, or assumption of, a concrete or definite form; ‘embodiment’. ? Obs.

2. concr. a. A body, person, or form in which a soul, spirit, or deity is incarnated; an incarnate or embodied form (of).

b. A person in whom some quality, attribute, principle, etc. is exhibited in a bodily form; a living type or representative, embodiment, impersonation (of a quality, etc.).

c. Loosely or by extension: A thing in which some quality, etc. is typically represented or exhibited; an embodiment (of).

5. Flesh-colour, carnation; a pigment or dye of this colour. Obs. or arch. 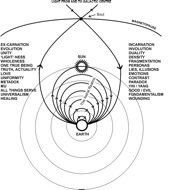 The cosmogonic cycle expressed in the process of incarnation and ex-carnation (evolution). From the Soul Seed, descending into matter, fragmenting into many personas. Through cycles of incarnation, expanding consciousness through each of the seven astral planes to rejoin with the Sun (self-actualised consciousness).

In the Bahá'í Faith, God is described as a single, imperishable God, the creator of all things, including all the creatures and forces in the universe. The connection between God and the world is that of the creator to his creation. God is understood to be independent of his creation, and that creation is dependant and contingent on God.

In the Buddhist tradition, an incarnation is a person believed to be the rebirth of someone previously deceased, in most cases a lama or other important master/teacher. This concept differs from reincarnation in Hinduism, however, since the Buddhist teaching of anatta (non-self) implies that there is no fixed soul that could move from one life to another.

The doctrine of the Incarnation of Christ is central to the traditional Christian faith as held by the Roman Catholic, Eastern Orthodox, most Protestant churches. Briefly, it is the belief that the Second Person of the Holy Trinity, also known as the Son or the Logos (Word), "became flesh" when he was miraculously conceived in the womb of the Virgin Mary.

The Pharaohs of Ancient Egypt were sometimes said to be incarnations of the gods Horus and Ra.

In Hinduism, incarnation or avatar generally implies to the incarnation of god Vishnu, the preserver in the Hindu Trinity. Other gods like Ganesha and Shiva do have avatars, but these are less popular than those of Vishnu.

Sikhism supports the concept of incarnation.According to sikhism there are 84 million forms of life. And one goes through these forms with human being as the supreme form of life. According to Sikhism, it is the one's deeds which decide how many time he will be incarnated. Meditation is the only form to liberate a soul from the process of incarnation.

Islam completely rejects the doctrine of the incarnation of God in any form. In Islam God is one and neither begets nor is begotten. Qur'an, (112:1-4). Islam specifically rejects the Christian idea of Jesus as a divine incarnation, but rather sees Jesus as a prophet (nabī) and messenger (rasūl) of God.