From Nordan Symposia
(Redirected from Model)
Jump to navigationJump to search 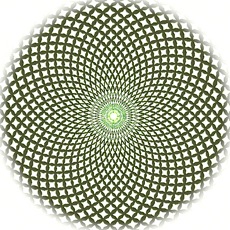 A pattern, from the French patron, is a type of theme of recurring events of or objects, sometimes referred to as elements of a set. These elements repeat in a predictable manner. It can be a template or model which can be used to generate things or parts of a thing, especially if the things that are created have enough in common for the underlying pattern to be inferred, in which case the things are said to exhibit the unique pattern. Pattern matching is the act of checking for the presence of the constituents of a pattern, whereas the detecting for underlying patterns is referred to as pattern recognition. The question of how a pattern emerges is accomplished through the work of the scientific field of pattern formation.

Patterns are also related to repeated shapes or objects, sometimes referred to as elements of the series. Some patterns (for example, many visual patterns) may be directly observable, such as simple decorative patterns (stripes, zigzags, and polka-dots). Others can be more complicated, such as the regular tiling of a plane, echos, and balanced binary branching.

For lessons on the topic of Pattern, follow this link.

The most basic patterns are based on repetition and periodicity. A single template, or cell, is combined with duplicates without change or modification. For example, in aviation, a "holding pattern" is a flight path which can be repeated until the aircraft has been granted clearance for landing.

Pattern recognition is more complex when templates are used to generate variants. For example, in English, sentences often follow the "N-VP" (noun - verb phrase) pattern, but some knowledge of the English language is required to detect the pattern. Computer science, ethology, and psychology are fields which study patterns.

Theory of Computation attempts to grasp the patterns that appear within the logic of computer science. Since efficiency is extremely important when executing a command, minimizing a pattern into its most basic form becomes evermore

The irrational number (approximately 1.618) is found frequently in nature. It is referred to as the golden ratio, and is defined by two numbers, that form a ratio such that (a+b)/a = a/b (a/b being the golden ratio). It has a direct relationship to the Fibonacci numbers. This pattern was exploited by Leonardo da Vinci in his art. The Fibonacci pattern has a closed-form expression. These patterns can be seen in nature, from the spirals of flowers to the symmetry of the human body (as expressed in Da Vinci's Vitruvian Man, one of the most referenced and reproduced works of art today. This is still used by many artists).

Fractals are mathematical patterns that are scale invariant. This means that the shape of the pattern does not depend on how closely you look at it. Self-similarity is found in fractals. Even though self-similarity in nature is only approximate and stochastic, integral measures describing fractal properties can also be applied to natural "fractals". Examples of such are coast lines and tree shapes, which repeat their shape regardless of what magnification you view at. While the outer appearance of self-similar patterns can be quite complex, the rules needed to describe or produce their formation can be extremely simple (e.g. Lindenmayer systems for the description of tree shapes).

Patterns are common in many areas of mathematics. Recurring decimals are one example. These are repeating sequences of digits which repeat infinitely. For example, 1 divided by 81 will result in the answer 0.012345679... the numbers 0-9 (except 8) will repeat forever — 1/81 is a recurring decimal.

In geology, a mineral's crystal structure is composed of a recurring pattern. In fact, this is one of the 5 requirements of a mineral. Minerals must have a fixed chemical composition in a repeating arrangement, such as a crystal matrix. For a 2-dimensional crystal structure, there are 10 different planar lattices possible. Moving up to 3 dimensions, 32 patterns are possible. These are called bravais lattices.

The recurring pattern of regular polygons is called a tessellation. Out of all possible combinations, there are only three possible regular polygons that can complete a repeating pattern. These polygons are squares, triangles, and hexagons. The hexagon is the most stable version for engineering purposes. Any shear stress upon segments of the hexagon series is distributed over the six points.

"Art is the imposing of a pattern on experience, and our aesthetic enjoyment is recognition of the pattern."

Mathematics is commonly described as the "Science of Pattern."