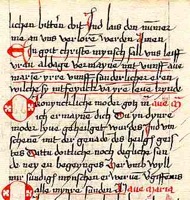 The New Testament apocrypha are a number of writings by early Christians that give accounts of Jesus and his teachings, the nature of God, or the teachings of his apostles and of their lives. These writings often have links with those books which are regarded as "canonical". Not every branch of the Christian church is in agreement as to which writings are to be regarded as "canonical" and which are "apocryphal"

The word "apocrypha" means "hidden writings" and comes from the Greek through Latin. The general term is usually applied to the books that were considered by the church as useful, but not divinely inspired. As such, to refer to Gnostic writings as "apocryphal" is misleading since they would not be classified in the same category by orthodox believers.

That some works are categorized as New Testament Apocrypha is indicative of the wide range of responses that were engendered in the interpretation of the message of Jesus of Nazareth. According to Eusebius the first such gospel was the Gospel according to the Hebrews. During the first several centuries of the transmission of that message, considerable debate turned on safeguarding its authenticity. Three key methods of addressing this survive to the present day: ordination, where groups authorize individuals as reliable teachers of the message; creeds, where groups define the boundaries of interpretation of the message; and canons, which list the primary documents certain groups believe contain the message originally taught by Jesus (in other words, the Bible). Many early books about Jesus were not included in the canons, and are now termed apocryphal. Some of them were vigorously suppressed and survive only as fragments. The earliest lists of authentic works of the New Testament were not quite the same as modern lists; for example, the Book of Revelation was long regarded as inauthentic, while Shepherd of Hermas was considered genuine by many Christians, and appears in several ancient Bibles.

The works that presented themselves as "authentic" but that did not obtain general acceptance from within the churches are called "New Testament Apocrypha". These are not accepted as canonical by most mainstream Christian denominations; only the Ethiopian Orthodox Church recognizes the Shepherd of Hermas, 1 Clement, Acts of Paul, and several Old Testament books that most other denominations reject, but it should be noted that this church does not adhere to an explicit canon. The Syriac Peshitta, used by all the various Syrian Churches, originally did not include 2 Peter, 2 John, 3 John, Jude and Revelation (and this canon of 22 books is the one cited by John Chrysostom (~347-407) and Theodoret (393-466) from the School of Antioch [1]). Western Syrians have added the remaining five books to their New Testament canons in modern times [2](such as the Lee Peshitta of 1823). Today, the official lectionaries followed by the Malankara Syrian Orthodox Church, with headquarters at Kottayam (India), and the Chaldean Syrian Church, also known as the Church of the East (Nestorian), with headquarters at Trichur (India), still only present lessons from the 22 books of the original Peshitta. [3] The Armenian Apostolic church at times has included the Third Epistle to the Corinthians, but does not always list it with the other 27 canonical New Testament books. This Church did not accept the Revelation into its Bible until 1200 CE.[4] The New Testament of the Coptic Bible, adopted by the Egyptian Church, includes the two Epistles of Clement.

Books that are known not to have existed in antiquity are usually not considered part of the New Testament Apocrypha. Among these are the Libellus de Nativitate Sanctae Mariae (also called the "Nativity of Mary") and the Latin Infancy Gospel. The latter two did not exist in antiquity, and they seem to be based on the earlier Infancy Gospels.[1]

Some of the most complete collections and resources on New Testament Apocrypha can be found at: