From Nordan Symposia
(Redirected from Novice)
Jump to navigationJump to search 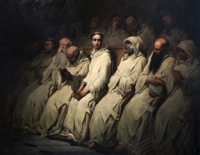 A neophyte is a beginner. In the context of Christianity, the term often refers to a: