From Nordan Symposia
(Redirected from Quietly)
Jump to navigationJump to search 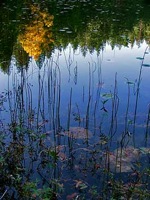 Quiescence (kwē-ĕs-ənts) is a Latin-derived English language noun referring to a state of being quiet, still, at rest, dormant, inactive. Its adjectival form is quiescent, for example "a quiescent mind."

For lessons on the related topic of Silence, follow this link.

The dualism of Upaniṣadic thought is distinct from the dualism between the mind and the body in Western philosophy. In Cartesian dualism, the two domains that are sharply distinguished are the mental and the physical. While Indian philosophers certainly recognized such a distinction, they were more impressed by what the mental and the physical had in common, namely that they were both thought to be causally conditioned, with cause preceding effect in a regular, predictable way. Indeed, it was the regular, predictable nature of the mind that enabled spiritual practitioners to manipulate it to their desired goal of quiescence,2