From Nordan Symposia
(Redirected from Spectacles)
Jump to navigationJump to search 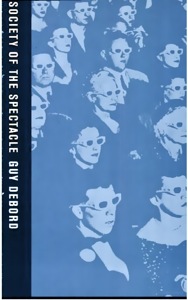 In general spectacle refers to an event that is memorable for the appearance it creates. Derived in Old English from c.1340 as "specially prepared or arranged display" it was borrowed from from Old French spectacle, itself a reflection of the Latin spectaculum "a show" from spectare "to view, watch" frequentative form of specere "to look at.[1] The term "spectacle" has also been a term of art in theater dating from the 17th century in English drama.

The term was borrowed from the Roman practice of staging Circuses, in the rather famous philosophy of the Roman elite of "Bread and Circuses" to maintain civil order due to the an inability to solve underlying social and economic problems.[2]

For lessons on the related topic of Sensationalism, follow this link.

"Spectacle" operates in two contexts simultaneously. On the one hand, it refers to high culture (drama, movies) performances where the draw for an audience is the impressive visual accomplishment. On the other hand, it refers to low cultural shows operating in a folk environment. These can range from the freak show to folk drama to tablieau and beast-plays. The two worlds have always interacted to a lesser or greater degree, with the folks spectacle often being rewritten into a literary spectacle, whether for humor (e.g. The Mechanicals with their performance of Pyramus and Thisbe in William Shakespeare's A Midsummer Night's Dream) or not (e.g. the serious treatment of the folk Everyman).

Low and high culture mingled in the spectacle as long as folk productions of spectacle were possible. In the 17th century in England, popular spectacles of the playhouse would be adapted into spectacles for the fair, and in the 18th century fair shows and pantomimes would be adapted to the playhouse stage. In the 19th century, theaters moved farther from folk cultural spectacles and began to develop stand-alone seasonal plays that were centered on a spectacular piece. However, in the 20th century, with the invention of movie theaters, folk festivals were unable to create or recreate the spectacles on film, and the theaters themselves were soon unable to replicate the spectaculars of films. Although film adaptation would occasionally begin with the old, folk mythological narrative material, the movie that resulted would be distributed out to all audiences, thus destroying the audience and source of folk spectacle. Spectacle comes from the word spectator, which could be someone who watches the performance.

The Masque and Spectacle

Court masques and masques of the nobility were most popular in the Jacobean and Caroline era. Such masques, as their name implies, relied heavily upon a non-verbal theater. The character lists for masques would be quite small, in keeping with the ability of a small family of patrons to act, but the costumes and theatrical effects would be lavish. Reading the text of masques, such as The Masque at Ludlow (most often referred to as Comus), the writing is spare, philosophical, and grandiose, with very few marks of traditional dramatic structure. This is partially due to the purpose of the masque being family entertainment and spectacle. Unlike The Masque at Ludlow, most masques were recreations of well-known mythological or religious scenes. Some masques would derive from tableau. For example, Edmund Spenser (Fairie Queene I, iv) describes a masque of The Seven Deadly Sins.

Masques were multimedia, for they almost always involved costuming and music as a method of conveying the story or narrative. Ben Jonson, for example, wrote masques with the architect Inigo Jones. William Davenant, who would become one of the major impressarios of the English Restoration, also wrote pre-Revolutionary masques with Inigo Jones. The role of the architect was that of designer of the staging, which would be elaborate and often culminate in a fireworks show.

When the zoetrope and nickelodeon technology first appeared, the earliest films were spectacles. Thomas Edison advertised his productions as things that people had never seen before. The actual Eiffel Tower, actual American Indians in a simulated attack, and even celebrated beauty queens were the subjects and reasons for film. Louis Lumière's film of a train pulling into a station in 1895 was a sensation because it gave an object of gaze, of spectacle that audiences would never have experienced otherwise (for the camera was in front of the train, and the train appeared to be coming directly at the viewer).