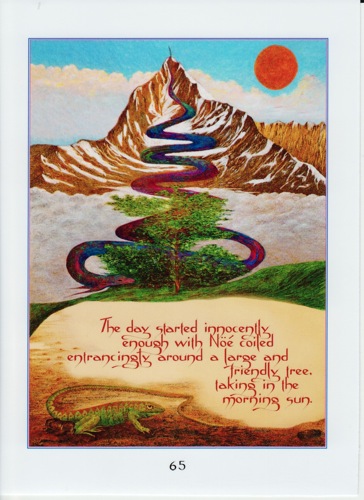 Many changes, too, had been shaping the human races over this last crucial few hundred thousand years in their development. The demands of survival and the challenging climatic conditions had triggered the mutations required to cope with a wide variety of difficult circumstances. Diets changed as more efficient weapons made hunting larger animals possible, and this in tum contributed the protein needed for bigger brains and stronger bodies. Whole nomadic populations became trapped on the great northern continent as the ice receded. Sea levels rose behind them, forcing them to adapt to frigid new conditions. By this time groups of Neanderthals had developed remarkably large brains, and yet isolated from the innovations introduced by the Prince's Staff, they had not progressed much beyond living in caves and using simple stone implements.

In the more temperate regions, a ero-Magnon subspecies had emerged from the proto-human line as the dominant mutation. It was from this group that the Prince's Staff, in their heyday, chose those individuals to educate and then send back to their own people to share all they had learned. Complex languages had started to emerge, which both deepened relationships and made the transmission of knowledge between generations more effective. With all this new knowledge came power and confidence, which in turn led to elaborate social hierarchies replete with kings, standing armies, aristocracies, accumulated wealth and the traditions of priestcraft.

Almost all the closely-held metallurgical secrets brought by the Prince's Staff had been lost in the destruction of their city. The Staff had always made sure to keep the sophisticated technology they used for constructing their antigravity vehicles well out of the sight of curious natives. Inevitably, this had led to their craft being worshipped as divine apparitions on the rare occasions they had been seen. Most of these skills had melted away, however, when the bitter conflict between the staff had driven them apart. Then, as the waves swept over their city and the remnants fled, the highest technical culture the world had yet seen passed into legend. In the ensuing millennia of chaos, unsuccessful attempts had been made to work with tin, or copper, when it could be found in natural outcroppings, but the art of alloying these metals to cast into bronze implements had to be rediscovered much later.

After the long, slow rhythms of the early evolutionary process, Noe was fascinated to watch how rapidly matters were developing all around hir. The hunting and gathering of nomadic tribes was rapidly becoming replaced by an agricultural economy centered around small villages and market towns. Memories of a legendary city, or perhaps simply the natural tendency for human beings to congregate in the same place, drove yet another era of city-building on every continent that the humans had reached. Civilizations rose, flowered briefly and then collapsed under their own weight or were overrun by another warlike horde.

In this bewildering panorama of shifting cultures Noe found it next to impossible to decide on how, or where, or with whom, sHe should consummate hir mission.