From Nordan Symposia
(Redirected from Write)
Jump to navigationJump to search 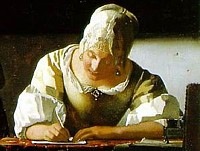 A writer is anyone who creates a written work, though the word usually designates those who write creatively or professionally, as well as those who have written in many different forms.

For lessons on the topic of Writing, follow this link.

The word is almost synonymous with author, though somebody who writes, for example, a laundry list, could technically be called the writer of the list, but not an author. Skilled writers are able to use language to portray ideas and images, whether fiction or non-fiction.

A writer may compose in many different forms including (but certainly not limited to) poetry, prose, or music. Accordingly, a writer in specialist mode may rank as a poet, novelist, copywriter, composer, lyricist, playwright, mythographer, journalist, screenwriter for film or television, etc.

Writers' output frequently contributes to the cultural content of a society, and that society may value its writerly corpus – or literature – as an art much like the visual arts (see: painting, sculpture, photography), music, craft and performance art (see: drama, theatre, opera).

In Colonial England, a "Writer" was the lowest grade in the civil services abroad. With respect to society, little has changed in this regard. The East India Company requirements for a "Writer" was a basic knowledge of accounts and youth. Applicants had to sign a bond and obtain a nomination.[1] In the British Royal Navy, writer is the trade designation for an administrative clerk.

Whether writers are devoted to the craft or not, they are expected to be able to write well both offline as well as online, or at least recognize the difference between the two.[3] When writing for the Web, it is the content that matters. Writing for the Web is very different from writing for print. Print today remains superior to the Web when it comes to visible space, image and type quality, and speed.[4] Web visitors are quickly scrolling through sites seeking specific information and will not always take the time to read every word. Traditional writing techniques and standards are less of a priority, as multiple headings, bullets and lists are needed to aid scanning readers. Although reputable writers compose much of this writing, the quality can appear less than professional. Also, with the increase of tech people working as a website content writer, the rules of grammar need to be put into effect.[5]

Writers not writing for a living often find enjoyment and small payouts from Web sites seeking material to raise their sites higher in the search engine rankings. Although this is a legitimate practice, the writing being published on the Web can often be less than professional. This lack of professionalism distorts the line between qualified and amateur writers. Writing standards are often not the highest priority as Web sites seek to drive traffic to gain advertising exposure. It seems as if readers are not as concerned about the writing quality, as long as they find a relevant account on a particular topic.[6]