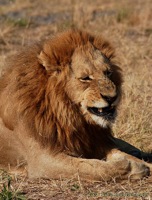 A carnivore (pronounced /ˈkɑrnɪvɔər/), meaning 'meat eater' (Latin carne meaning 'flesh' and vorare meaning 'to devour'), is an organism that derives its energy and nutrient requirements from a diet consisting mainly or exclusively of animal tissue, whether through predation or scavenging. Animals that depend solely on animal flesh for their nutrient requirements are considered obligate carnivores while those that also consume non-animal food are considered facultative carnivores. Omnivores also consume both animal and non-animal food, and apart from the more general definition, there is no clearly defined ratio of plant to animal material that would distinguish a facultative carnivore from an omnivore, or an omnivore from a facultative herbivore, for that matter. A carnivore that sits at the top of the foodchain is an apex predator.