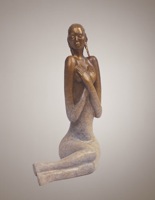 The words "chaste" and "chastity" stem from the Latin adjective castus meaning "pure". The words entered the English language around the middle of the 13th century; at that time they meant slightly different things. "Chaste" meant "virtuous or pure from unlawful sexual intercourse" (referring to extramarital sex), while "chastity" meant "virginity". It was not until the late 16th century that the two words came to have the same basic meaning as a related adjective and noun.

Chastity is sexual behavior of a man or woman acceptable to the moral norms and guidelines of a culture, civilization, or religion.

In the western world, the term has become closely associated (and is often used interchangeably) with sexual abstinence, especially before marriage. However, the term remains applicable to persons in all states, single or married, clerical or lay, and has implications beyond sexual temperance.

In Catholic morality, chastity is placed opposite the deadly sin of lust, and is classified as one of seven virtues. The moderation of sexual desires is required to be virtuous. Reason, will and desire can harmoniously work together to do what is good.[1]