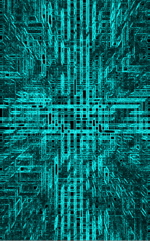 Electronic circuits can display highly complex behaviors, even though they are governed by the same laws of physics as simpler circuits.

For lessons on the topic of mind Circuitry, follow this link.

Analog electronic circuits are those in which signals may vary continuously with time to correspond to the information being represented. Electronic equipment like voltage amplifiers, power amplifiers, tuning circuits, radios, and televisions are largely analog (with the exception of their control sections, which may be digital, especially in modern units).

The basic units of analog circuits are passive (resistors, capacitors, inductors, and recently memristors) and active (independent power sources and dependent power sources). Components such as transistors may be represented by a model containing passive components and dependent sources. Another classification is to take impedance and independent sources and operational amplifier as basic electronic components; this allows us to model frequency dependent negative resistors, gyrators, negative impedance converters, and dependent sources as secondary electronic components. There are two main types of circuits: series and parallel. A string of Christmas lights is a good example of a series circuit: if one goes out, they all do. In a parallel circuit, each bulb is connected to the power source separately, so if one goes out the rest still remain shining.

In digital electronic circuits, electric signals take an discrete values, which are not dependent upon time, to represent logical and numeric values. These values represent the information that is being processed. The transistor is one of the primary components used in discrete circuits, and combinations of these can be used to create logic gates. These logic gates may then be used in combination to create a desired output from an input.

Larger circuits may contain several complex components, such as FPGAs or Microprocessors. These along with several other components may be interconnected to create a large circuit that operates on large amount of data.

Examples of electronic equipment which use digital circuits include digital wristwatches, calculators, PDAs, and microprocessors.