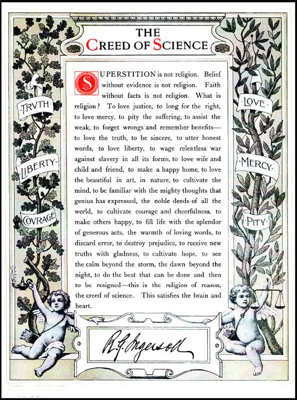 A creed is a statement of belief—usually religious belief or faith—often recited as part of a religious service. The word derives from the Latin: credo for "I believe" (because the Latin translation of the Apostles' Creed and the Nicene Creed both begin with this word). A creed is sometimes referred to as a symbol (Greek: σύμβολο[ν], sýmbolo[n]), signifying a "token" by which persons of like beliefs might recognize each other.

One of the most widely used creeds in Christianity is the Nicene Creed, formulated in AD 325 at the First Council of Nicaea. Affirmation of this creed, which describes the Trinity, is generally taken as a fundamental test of orthodoxy for most Christian denominations. The Apostles' Creed is also broadly accepted. Some Christian denominations and other groups have rejected the authority of those creeds.

Whether Judaism is creedal has been a point of some controversy. Though some say Judaism is noncreedal in nature, others say it recognizes a single creed, the Shema. "Hear O Israel, the Lord is our God, the Lord is One."[Deut. 6:4]

The terms "creed" and "faith" are sometimes used to mean religion. Where "creed" appears alongside "religion" or "faith," it can also refer to a person's political or social beliefs, for example The American's Creed.